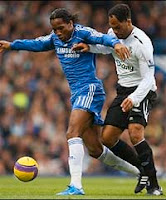 I've been watching Everton for many years now, and it's been more 'thin and thinner' than 'thick and thin', although I do remember the glory years of the mid-80's as well as the 'School of Science' days of the late 60's.

Recently there's been a real yo-yo period, with one good year followed immediately by a mediocre year. This season, however, I am beginning to feel that, for the first time in a long time, we have a team (and a squad) that has real depth and potential to snap at the heels of the big boys.

Even in recent seasons, when firstly we saw the emergence of the Boy and later, when we broke into the top 4, there was always the nagging doubt that there was any real substance there. Wayne was an absolute joy to watch when he broke into the first team, and the goal he scored against Arsenal that season is, and will always be, one of my finest moments in a football ground. But the rest of the team was so far off his standards at the time that, with hindsight, it was inevitable he'd move to one of the big boys. The season we finished fourth, that had as much to do with the failings of the teams around us as our own ability, although the team spirit that season was unbeatable - the whole being much, much more than the sum of the parts.

This season though - despite a few results where we have not had the run of the green (or the support of the officials, Mr Clattenberg) - things are beginning to feel a bit different, for two reasons. 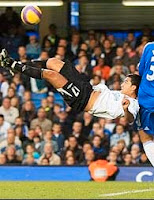 Firstly, we now have a number of first team players who would grace any team in the league - the likes of Lescott, Cahill, Arteta, Howard and Johnson would enhance the squads of any of the big four and would be guaranteed a start in all the others.

But more than that, the strength in depth is incredible in most areas - up front, for instance, we have five (yes, five) forwards - Yakubu, Johnson, McFadden, Anichebe and Vaughan - which must represent the strongest group of any team in the league - including the Big 4.

And in addition to that, the team spirit is still there, coupled with fantastic fitness levels. Three times in the last ten days Everton have won, or rescued, games with goals in the last five or ten minutes - testament to the team's ability to play right through to the final whistle and to impressive strength off the bench.

Yes, there are areas that still need strengthening - the midfield is massively skilful, but too lightweight to challenge at the highest level, and we need another centre-back to cover for Yobo and Lescott as Stubbs inevitably draws to the end of his career. And there is always the danger of being left behind as other clubs attract the foreign investment that we desperately need to compete (and as I have said elsewhere, a knocked-together shed in Kirkby is not the answer here).

But for the moment, just after a battling draw at Chelsea (due to a wonderful goal from Tim Cahill) and a sparkling win in midweek (thanks Victor!) the future feels bright, and Royal Blue rather than Orange.
Posted by Paul Waring at 5:54 pm No comments: