Today's soundtrack:  Mott the Hoople - The Ballad of Mott (A Retrospective)

And so it begins - the 2010 World Cup is two days old!  And already I'm sick of that bloody noise, droning on and on incessantly throughout the game.

But enough about Mick McCarthy.

England get off to their traditional awful start, shooting themselves in the foot with yet another dreadful goalkeeping error.  Whilst you have to feel for Robert Green, it was woeful.  I suspect that's his World Cup over already.  Please God let Ledley King's tournament not be over, as the thought of Carragher lumbering about in the centre of defence, a leg-breaking tackle and sending off just waiting to happen, doesn't bear thinking about.  Phil Jagielka, Joleon Lescott and others must wonder what they've done to upset Capello. 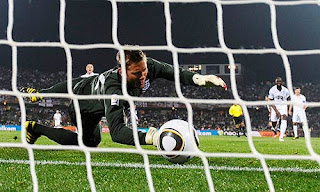 Still, good to see Messrs Donovan and Howard playing well, as did Joe Yobo and the Yak in the Argentina - Nigeria game.

It's early days, but no single team has really stood out so far.  Possibly the South Koreans, but then they were playing a Greek team who were so abject it was untrue.  Argentina made hard work of their win against Nigeria, but there is so much talent in their ranks one would expect them to go far.  I hope they do - if only for the joy of seeing Maradona strutting about on the touchline like a bearded, bouncy, wind-up weeble.  Diego could dominate this tournament - in a very different way - as much as he did in 1986.

So today the delights of Algeria v Slovenia, Serbia v Ghana and Germany against the Socceroos.  Come on Timmy!  Plus, of course, a Grand Prix to fit in as well.  Mrs W can have the telly back when I'm at Glastonbury.

A bit of Mott playing in the background as I type.  Back in the mid-70s, Mott were *my* band - firstly the early, pre-fame rocky stuff on Mad Shadows and Brain Capers, then the later, glam-flecked Dudes phase when they bothered the charts for a brief period.  The glam stuff never really sat well with them, they were rockers at heart, but when they were good, they were very good indeed.  And no-one wrote better songs about being in a band than Ian Hunter.

And here is just such a song!  The Ballad of Mott!  A song by Mott, about Mott.  Tune!