So - back at work - aren't the weekends then free for rest and relaxation?  Why is it, now I'm working for The Man again, that I ended up working harder round the home today than I have done for ages?

Because the jobs don't go away, I suppose, and maybe also because I'm now back at a proper 'working pitch' that I've more enthusiasm and energy to actually do the things that I would 'eventually get round to' before.

First thing, it was off to the supermarket to do the weekly shop.  My turn this week - Mrs W has suggested that going forwards we alternate - her turn next week.  Big shop this week, we both need 'cutting-up' for worktime lunchtimes and the freezer has been running a bit low.  I did make a schoolboy error at the checkout though - standing in a queue, laden down with a full trolley, and one of the supermarket kids calls me over to a free checkout.  Result! I thought - until I realised he'd set me up on a self-service lane.  Fine (I suppose) if you've one or two items - but not a trolley-full, surely?  Anyway, I got on with it, getting crosser and crosser as I had to weigh (and find the price for) red onions (under 'O' rather than 'R' in the menu) and mini ciabattas (described as 'rolls' in the menu - who would have guessed?) and get the girl to confirm I was eighteen and ok to buy booze.

Mind you,. I still finished quicker than I would have done had I stayed in my queue, so not all bad.

Back home, and after a delightful lunch of BLTs on the small ciabatta rolls I'd struggled to buy in the supermarket, and after the ManYoo-Spurs game, it was out into the garden for more chores.

Firstly, the mower and strimmer made their first appearance of the year, followed by the garden shears as I trimmed back a bush that was encroaching from next door - and then it was the turn of the electric drill, some wood and a raft of wood screws as I finally got round to repairing the fence that had been falling down all year.  Lastly, the rake and the hose came into play as I cleared and re-seeded the bare patch of lawn that had been ravaged by birds and badgers over the course of last year.

You'd think that would be enough, wouldn't you?  Well no, the work continued, this time in the kitchen.  Although this turned out to be a really pleasant surprise.  We'd struggled to fit all today's food shopping into the freezer, so to make room, I'd taken out some bags of soft summer fruits that Mrs W had bought ages ago for reasons that are still unclear to me.  I had half-hearted plans to mush them up and make some smoothies or something, until inspiration struck.

Did a quick search on t'internet, found a recipe, and got on with it.  The fruit I simply drained and placed in the bottom of a dish.  The crumble comprised 150g each of plain flour, porridge oats, demarera sugar and butter, mixed together by hand in a bowl until it got all crumbly and sandy.  Crumble topping on top of fruit, in a hot oven (180 degrees C) for half an hour or so.  It made the kitchen smell delicious and, oh, it tasted good as well!  We had it with some fruit yogurt that was lurking, although I've now got some double cream in for tonight's leftovers. 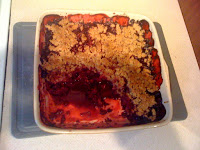 A pleasant little download ep from American 'intelligent rockers' Death Cab for Cutie this morning.  We saw Death Cab (named after a Bonzo Dogs song) a couple of years ago at Latitude, and enjoyed them immensely.  There's always a place for good, melodic pop sung and played with a bit of wit and style, and the Americans seem to be particularly good at it.

Here's 'The New Year' live on Soundstage from a few years back...