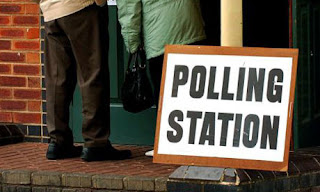 Fun and games today at the polling station - I've just sent this email to both the local council and the Electoral Commission - locations changed to protect the innocent...

I would like to bring to your attention a situation that arose when I tried to vote in the above election this morning, which I feel was unsatisfactorily resolved and which needs to be rectified for future elections.

My name is Paul Waring - my full postal address is [xxxxxxxxxxx].  I have lived at this address with my wife for the past ten years or so.

I went to vote this morning at the polling station at [the local school] (which is approximately 100 yards away from my front door), as I have at every election for the past ten years.  This time, however, upon inspecting my Poll Card, the presiding officer advised me that I was not on his list, and that I ought to be voting at [another school] - some five miles away.  Indeed, my poll card did declare that my polling station was [the other school].  I had not thought to check this - why would I, given my previous voting experience?

The Presiding Officer kindly agreed to check by telephone with some higher authority whether an error had been made, clearly pointing out that my address placed me firmly within [the local] Ward, rather than the ['not so local'] Ward, and the relative distance from my house to the two polling stations.  Notwithstanding this, he was advised that I would not be able to vote locally but would have to go five miles away to vote.  He did advise me that one at least of my next door neighbours was still down to vote locally and suggested that there had been a boundary re-drawing that effectively bisected my property and next door.

Despite the implausibility of this argument, I happily accepted that this was the advice he had been given and he had to abide by it.  I therefore drove the five miles and regaled the attending officers there with my tale of woe.  They confirmed that I was indeed on their list, and so I cast my votes (both Council and AV) there.

However later today I was able to check the Ward boundaries and it is quite clear that my house is firmly within [the local] Ward and nowhere near any boundary with [the other] Ward.

I am therefore disappointed, and not a little concerned, that I have voted in a ward that I do not live in, for candidates who will not be able to represent me.  Furthermore, my preferred candidate in [the local] Ward has been deprived of my vote.

Further inspection of my Poll card indicates that my address omits the village name.  This is not unusual - [my local town] is indeed part of my postal address and in any event, the house number and post code alone would be sufficient to indicate exactly where I live.  However I suspect that - for whatever reason - the sole reference to [my local town] in my address has - incorrectly - been the prime determinant of where I should vote.  There is a [xxxxxx Street] in [my local town], and for all I know, there is a number [xxx] as well - but I don't live there.

For completeness, the 'Number on Register' recorded on the Poll card is [xxxxxxx].

If indeed the omission of the my village name from my address is the cause of this error - then I would hazard a guess that I am not the only one affected in this way.  I would hope, however, that the number of addresses affected would not be sufficient to have a material effect on the outcome of the election.

In any event, what is done is done, as far as this election is concerned.  I would be grateful however if you could investigate, and ensure that my details are corrected so that the same issue does not arise in future elections.

I shall report back with their responses...

I was also going to copy the candidate who has been deprived of my vote, just for devilment like, but sadly can't locate an email address.
Posted by Paul Waring at 6:48 pm

Perhaps, it's time to consider making voting at home or at work (i.e. through the internet) if not compulsory, at least an option in future. I'm sure the technology exists to allow this to happen.