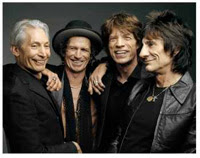 I gave up on the Stones sometime back in the late '70's/early '80's, not long after Some Girls, and in the context of the 'year zero' mood that surrounded the birth of punk - why did I need the Stones in my life when I had The Clash?

Why indeed? To be fair to myself, the Stones didn't help themselves - apart from the odd track here and there, there was nothing coming out of Rolling Stones Records to make me think my view of them was fundamentally flawed. And yet...

Back in the '60's, I was a Beatles boy. No surprise really - growing up on Merseyside, left-handed and called Paul, there could only ever be one band for me. And the Stones were a bit dirty and smelly anyway. But then the '60's turned into the '70's, The Beatles were no more, and Sticky Fingers and Exile... began to make an impression on me. I remember buying Tumbling Dice on its release and playing it to death - despite being unable to make out a word Jagger was singing. Still can't, for that matter.

But it seemed like things were winding down for the Stones. I bought Goat's Head Soup, which was good (but not great), as was It's Only Rock 'n' Roll. Black and Blue was pretty average, and it started to go downhill from there. Some Girls upped the ante for a while, but was in hindsight a bit of a 'dead cat bounce'. And anyway, the world had moved on.

So that was that, really. but recently I chanced across a few bootlegs on t'internet from the golden era and thought, actually, they weren't a bad little band, really. On the back of that, I shelled out for the 'Biggest Bang' DVD set and.....well....they've still got it really, haven't they? Probably never lost it. 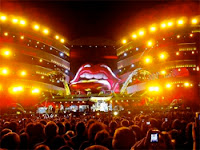 When you've been around for 40-odd years, you're going to have built up a bit of a back catalogue and by Christ, what a catalogue! But what really impresses is the energy and passion that still drives the live show. On DVD the sheer spectacle is inevitably scaled down, but this is a good thing, because what comes through is the actual tightness of the band - especially Charlie and Keef - and if I look half as good as Jagger when I'm his age, well, I'll be doing alright.

So - 40-odd years in...best live band on the planet? Yes, the old gits probably still are. So much for me dismissing them as rock dinosaurs/boring old farts thirty years ago!

Sorry chaps - you were right, I was wrong.
Posted by Paul Waring at 7:41 pm