The other best song written about Liverpool... 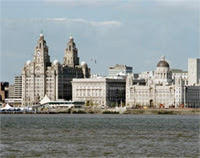 ...etc etc, is of course 'Heart as Big as Liverpool' by The Mighty Wah!, one of Pete Wylie's various alter egos (and variations on the Wah! theme) and one of the great anthems connected with the 'pool (has any other UK city had so many great songs written about it?). Despite the red shower over the park adopting it for themselves, I refuse to let the song be associated with them (unlike that dirge from Carousel, which they're welcome to). For me, it encapsulates all that's good about 'Merseypride' and is free of the victim, us against the world mentality that we are often accused of.