But since "a double dose of positive mental attitude" is the prescription, I'm not going to dwell on that topic, I'm going to stick to writing about the good, the positive.

Another trip to Old Trafford, another defeat.  You could argue that United's first goal was a once-a-season special, that the third was a lucky deflection and that the scoreline didn't reflect the play, but that would be to ignore the fact that, once again, Everton went to one of the Big Four with a game plan that put avoiding defeat ahead of anything else - a game plan that rapidly unravelled the minute Fletcher scored that goal.  It was only in the second half, when Moyes was forced to play 4-4-2, that we looked in any way threatening.

A double dose of Memphis this week, with Dusty on the soundtrack (about which, more later) and with part of my hotel-based entertainment this week involving 'The Road to Memphis', one of the seven films making up 'The Blues', the Martin Scorsese-produced series about the real American folk music.  The Road To Memphis focuses on a number of performers coming together for a major performance in Memphis - long-established performers like BB King and Ike Turner, but also Bobby Rush, scratching out a living on the chitlin circuit, and the wonderful Rosco Gordon, who gave up the blues for twenty-odd years to work in a dry cleaners in Queens, and who sadly died just six weeks after his joy-filled performance on stage in Memphis with some of the greats.

How 'Blues' is that?

Here's A Little Bit of Magic from Rosco.

Memphis just might be my favourite American city.  We spent a few days there a couple of years ago, courtesy of our good friend Elaine, and did the tour.

Graceland - which is as gloriously tacky as you'd expect, but also deeply moving as well.  I did have a barely controllable urge to sing a 'ragga' Heartbreak Hotel by Elvis's grave ("Too much fackin' perspective!") but managed to resist the temptation.  I'd have probably had my lights punched out by Elaine if I'd been in any way disrespectful! 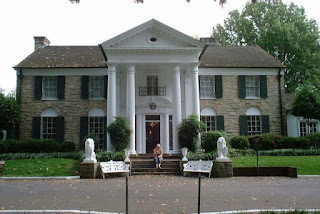 Sun Records - the place just oozes history.  The tiny studio, looking just as it must have fifty years ago, and still in use.

The Stax museum on McLemore Avenue - sadly the original Stax building was knocked down years ago, but has been lovingly rebuilt as a shrine to the home of Southern Soul.

The Peabody Hotel, Rendezvous Ribs (yummy!), the Lorraine Motel, Schwab's department store, the Gibson guitar factory - all there and all fascinating.

And Beale Street - yes, it's a tourist location now, and all the old bluesmen in the film bemoaned the loss of the 'old' Beale Street - but it's still the best night out around.  Bands playing for change in the street and on the square - bands who would knock the socks off some of the biggest names around.  Playing for the joy of playing and for the love of the Blues.

And yes - Dusty recorded in Memphis - the incongruous blend of Soulsville and this slightly prim English rose managing to produce one of the best albums of the sixties.  Great songs, great musicians and a great soulful singer with a real feel for the music.  Apparently she was almost rendered incapable by nerves, and recorded most of her vocals one line at a time - but the end product was seamless.