One Summer, this winter

Another week in Staines, with the routine pretty firmly established now.  Early start on a Monday, lunchtime dart on a Friday, a night out with Simon and a DVD series in the evenings.

This week I watched One Summer, a drama I last watched when it was broadcast back in the mid-eighties.  For a host of reasons, the series didn't find its way onto DVD for many years - but did eventually come out a couple of years ago.

Essentially the story of two Liverpool scallies - Billy and Icky - who leave the city to start a new life in Wales, near the site of a school trip Billy had enjoyed some years earlier.  The boys hook up with Kidder, an ex-schoolteacher who lives in a semi-derelict cottage.  The story is essentially about the relationship between the two boys, and between the boys and Kidder.  Unfortunately there are no happy endings although one of the boys, at least, comes out of the story a stronger, more mature person.

The series was as affecting and moving as I remember it being all those years ago, although there were many details I'd forgotten - or failed to pick up on at the time.  If you chance upon a copy of the DVD - going for a song on Amazon - then it's definitely worth a few hours of your time.

You can find out more about the series here, if you're interested. 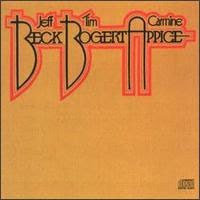 Back even further for today's soundtrack, to 1973, when the peripatetic Jeff Beck hooked up with Tim Bogert and Carmine Appice in the shortlived supergroup, the imaginatively-named Beck, Bogert & Appice.  The album's ok, but not really a stone classic, despite the pedigree of the participants.  Sometimes the whole does not equal the sum of the parts, unfortunately!

Here's some grainy footage of the boys playing Stevie Wonder's 'Superstition' - not as well as Stevie Ray Vaughan, and certainly not as well as Steveland himself.  But it still has a smidgen of charm, and demonstrates exactly where Nigel Tufnel got his haircut from!