My, but they're a strange lot, darn sarf.

Spent all week in Staines, getting my feet well and truly under the table.  I've been there long enough now to start getting to know people, and to enjoy a bit of old chat (as I believe they say down there.)

A bit of old chat with people like Jacqui, for instance.  Our conversation went something like this:

Wrong, Jacqui, but at the same time, so very, very right as well.  Especially after Thursday night, when the unwinning sequence continued against Benfica.  Luckily, Simon was over again, so I was able to forget about the match as we put the world to rights over yet another Roshni's curry.  0-0 at half time was respectable, 0-2 at full time...not so much.
Still, we should still qualify for the knockout stages, when no doubt we will be humiliated by a half decent team of European veterans at the first time of asking.
At least we are not Liverpool, though.
I ventured out of Staines this week to visit the new shopping centre in Shepherd's Bush, Westfield.
What a bloody silly place to put a shopping centre!  Probably not a good idea to drive there, though.
Still, once there, I had a good old meander, sorted out Mrs W's birthday stuff and copped a bite to eat - a very acceptable burrito from one of the varied concessions, since you ask.  It's quite an impressive place, if you like that sort of thing, but ultimately not as varied or comprehensive as I thought it would be.  Give me the Trafford Centre any day.
Another top tip for the weekend - if you buy the new version of Football Manager with the intention of whiling away the long, lonely hotel nights with a bit of computer-based escapism - then be sure not to take an empty box away with you.  Take the disc as well.
So I whiled away the long, lonely hotel nights with another DVD box set - this time going back in time to watch The Singing Detective, which was every bit as good as I remembered it - especially Joanne Whalley's eyes.  Oh yes.

Watching it again, would something like The Singing Detective ever get commissioned nowadays?  Imagine the pitch:
"It's about this writer, who is in hospital with a nasty skin disease.  While in hospital, he daydreams about a detective story, in which he also plays the main character - and sings as well.  "The Singing Detective", see?  He also has a series of flashbacks to a Vale of Dean-based childhood where everyone speaks in an impenetrable burr.  Oh, and at random points in the series, the actors will launch into improbable song and dance routines to break up the action a bit."
I don't think so, Mr Potter.

"Oh, and there's a bit of tit in it for the dads.  And Joanne Whalley is going to play a young nurse with big brown eyes."
Where do I sign up?
Marvellous. 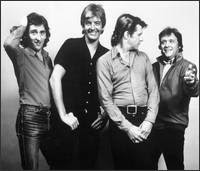 All with a bit of Rockpile in the background.  A Mess of Blues is - I think - a bootleg of a BBC radio performance from back in the '70s.  The cover says 1977, but I suspect that's a bit early.  Anyway, a decent performance it is, a young(ish) Nick Lowe performing with Dave Edmunds, Billy Bremner (not that one) and Terry Williams.  Lots of stuff from Nick's first album, some decent covers and the glorious 'I Knew the Bride (When She Used to Rock 'n' Roll).  Basic, no-nonsense pub rock, and there's nowt wrong with that at all.
Here are the boys, looking incredibly fresh faced, with the aforementioned bride.  Rock on!
Posted by Paul Waring at 10:52 am