(with apologies to Edwin Starr) 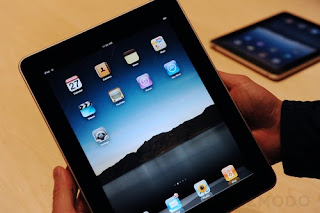 Now obviously, I've not seen an iPad yet, although I've been following the build up (and the post-launch disappointment) with some interest.  Many of you will know that I have been known to indulge in Apple products from time to time - although without ever being tempted down the Mac route.

So what is the iPad good for?  According to Steve Jobs, it is intended to sit in that space in between the mobile phone and the laptop that is currently filled by the rapidly-growing netbook market.  That is to say, something that is extremely portable, that will carry out basic computing tasks (primarily centered around web access, media playback and email) and that does so slickly and intuitively.  In addition, the iPad is 'taking on' the other area of rapid gadget growth - the 'ebook' reader - through the iBookshop that was also announced this week.

And - to be fair - all the indications are that the iPad will do these things very well.  But will it do it better than the alternatives that are already out there?  Also, if (like me) you already have iPhone, netbook and laptop (and desktop) - do you still need an iPad?

What can the iPad do that your iPhone (or, indeed, your iPod Touch) can't do?  Not an awful lot, really.  It just does it on a bigger screen with marginally more functionality.  But can you slip it into your pocket?  Err, no.  For certain apps, the iPad is just too bulky as well.  For instance, I have a very nifty shopping list application on my iPhone.  You input your shopping requirements, and tick them off as you go round the supermarket.  Easy with the phone, just a bit clumsy with an iPad.

Oh, and it doesn't make phone calls either.  Or take pictures.

So it ain't going to replace my phone anytime soon.

What about my netbook?  Would the iPad replace that?  What can it do that my netbook can't?  Both can play songs and movies.  Both can carry out general 'office' tasks.  Both can be used for surfing and emailing.

But my netbook can also be used for making video calls - it has a webcam built in.  My netbook can do two (or more) things at once (for example, check emails while surfing, or do instant messaging.  Or listen to internet radio).  The iPad can't - it can't multitask.  Nor can it print directly to a printer - wired or wirelessly.  Nor does it have the ability to directly import files etc via USB - there are no built in USB ports.

My netbook has 160gig of memory - the most the iPad has is 64g.  Which is not augmentable via USB sticks for the reasons outlined above.

Oh, and the iPad has no built in keyboard - you can either tap onto the screen, like your iPhone, or use a bluetooth keyboard, or buy the separate keyboard that has been designed for the iPad - the existence of which is surely tacit acknowledgement by Apple that the on-screen alternative is not ideal?

Finally - my netbook cost less that two hundred quid - less than half the cost of the cheapest iPad.

So it's not going to replace my netbook either.

Now - if I had neither phone or netbook - would I then be in the market for an iPad?  Well no, for the reasons outlined above.  It's not a phone - so you need a phone in any case...and the netbook does more, better.

So to the final category.  Is the iPad merely a better, more fully functioned eBook? 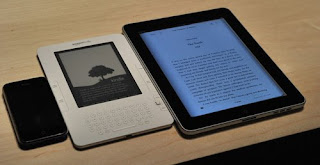 Well it probably is, actually.  The big USP of the dedicated eBook is the use of 'electronic ink' - displays that are supposed to be easier on the eye than a typical LCD screen and which use far less battery power to drive.  But they are monochrome only and take an age to refresh when you turn the 'page'.  The iPad displays in colour, is very responsive and does an awful lot more than your average eBook.  Also, the cheapest iPad is almost exactly the same price as the equivalent Kindle.

The argument about e-ink versus LCD remains - but I am not persuaded by the eyestrain claims made in favour of e-ink.  Like most of us, I spend hours at work or at home staring at LCD displays and rarely suffer from any form of eyestrain.  Whilst the e-ink screen may well be easier on the eye, I do not believe the 'hazards' of LCDs are as big as they have been made out to be.

So.  The iPad.  Not an iPhone killer.  Not a netbook killer.  An eBook killer?  Well maybe.  But then there is another alternative to the eBook called the Paperback.  Robust, easy on the eye and easily portable. I know what I'd rather read...

IMPORTANT CAVEAT:  All the above has been written without actually seeing, or holding, an iPad.  Once I have done so, I reserve the right to discard everything I have written above and to covet the iPad as, indeed, I have done with just about every piece of kit Apple has produced, ever.

And so to today's soundtrack.  I doubt many of you will have heard of The Silver Seas, but High Society is a thing of rare beauty, referencing the Beach Boys and the wider Californian/Laurel Canyon scene whilst remaining completely up to date.  Despite these reference points, the band actually hails from Nashville - although any pure (or alt) country styilings are difficult to discern.

This is great - 'The Country Life' recorded in the studio back in 2005.