Today's soundtrack:  Spiritualized - Ladies and Gentlemen we are Floating in Space

D'you know, it's been a long time since I've given you a recipe, so let's put that right today.  As the snow descends yet again, I think we could do with a rich, winter warming casserole, do you not think?

So I give you the Beef, Guinness and Prune Casserole.

No, come back, it's great, honest.  Even if you think you don't like either Guinness or prunes, you'll love this.

Start off a couple of hours before cooking by soaking a pack of prunes (about 250g) in enough Guinness to cover.  You will probably be left with half a can or so of Guinness - I suggest you drink this straightaway.

Start your actual cooking about three hours before you intend to eat.  Cut up a couple of pounds of stewing steak into chunks and coat with some seasoned flour.  Fry in oil in a big stew pot until the meat has browned, then take the meat out of the pan and put on a plate to one side.

Chop a couple of onions and fry off in the oil and meat juices left in the pan.  Add a pack of button mushrooms, unsliced.  Then slice three or four carrots and a few sticks of celery and add those to the pan.  Finally chop some garlic finely and add to the pot.  Stir and fry until cooked through and browning.

You'll probably be getting a bit thirsty by now so I suggest you open another can of Guinness and have a slurp (or two).

When the veg are sizzling nicely, return the meat to the pot and stir in until mixed through.  Then add your prunes, along with the Guinness they've been soaking in.  Add more Guinness, sufficient to just cover the meat and veg in the pan.  Drink any Guinness left in the can.

Leave to simmer on a very low heat for at least two hours, until the meat is cooked through, stirring occasionally to ensure the casserole doesn't stick.  By this time all the prunes should have dissolved and the sauce should have thickened to a decent gravy-like consistency (due to the flour you coated the meat in at the start.  You did coat the meat in flour, didn't you?).  If the sauce is too thin, thicken with cornflour.  Alternatively, if the sauce is too thick, simply add more Guinness, remembering to drink any that is left over.

Have a quick taste.  The sweetness of the prunes should have nicely counteracted the bitterness of the Guinness, but if it's still a bit bitter for your taste, add a teaspoon of sugar.  When no-one's looking. 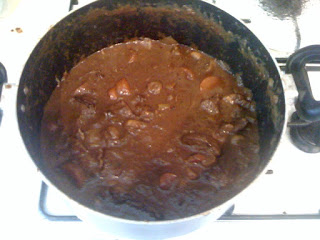 Serve with rice or baked potatoes.  If you're posh, serve some broccoli or another green vegetable on the side.

You'll probably have loads left over, which is a good thing as the tastes do improve still further if re-heated the next day.  Or stick it in the freezer.

BLTs on mini Ciabattas for lunch today as well.  Oh my.

Spiritualized are providing the woozy soundtrack to this cold Sunday morning here - Ladies and Gentlemen... is a great album for slipping on in the background and drifting along to.  Which is the point, really.  When first released, this in-no-way-influenced-by-drugs album was available in blister pack form, the CDs packaged like a box of pills, complete with instructions ("Spiritualized is used to treat the heart and soul.  For aural administration only.  Use only as directed by a physician.  Keep out of reach of children").

All I want in life's a little bit of love to take the pain away.