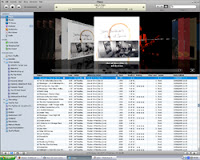 Who was it who decided that, on live albums, any spoken introductions to tracks should be tacked onto the end of the previous songs rather than at the beginning of the songs they are meant to introduce? When did this start? I don't recall it ever being the case on vinyl, but on CD/digital tracks it seems to be ubiquitous.

I know in the overall scheme of things it's a tiny thing to get upset about, but it pisses me off every time. If I'm listening to 'A Quick One' by the Who, I want to hear Townshend's little story before the song actually starts. I don't want to hear it after listening to 'Substitute'. This is especially annoying when you're listening on 'Shuffle' mode - after a long introduction from Bruce or Jimi or whoever, your iPod then sweeps you off to something completely different.

I can only assume it's a radio/DJ thing, so that songs can be easily cued up at the start of the music, but I don't care. I want introductions where they belong - introducing things!
Posted by Paul Waring at 9:45 am