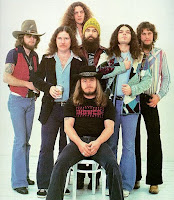 Basically an 'answer' song, written in response to Neil Young's 'Southern Man'.  In a nutshell - we're Southern and we're proud of it.  So don't be slaggin' us off with your trendy Yankee ways because we're just fine and dandy down here!  And so they are.  But it's not really the sentiment in the song that does it for me - it's the groove and the feel - the opening guitar riff is one of the slinkiest there is - not a note too many, not a note out of place.  Lynyrd Skynyrd could do overblown when they wanted to - Freebird being a case in point - but Sweet Home Alabama is tight as a gnat's chuff.  As, no doubt, they say in Montgomery.

Again, it's all in the riff.  The spiralling, three-note stab that invokes so well the Eastern 'vibe' implicit in the song's title.  A word of warning though - don't listen to the lyrics.  Really.  They make Spinal Tap's 'Stonehenge' sound profound.  But none of that matters.  This was a band at the height of its powers, pushing the boundaries in any number of directions, and exploring Eastern rhythms and time signatures that they would return to later in their careers.

Of course, there are many Zeppelin songs I could have chosen.  But for me, Kashmir is pure essence of Zep.

I love this song.  Often - erroneously - described as South Yorkshire's answer to Roy Orbison but more accurately referred to (by himself) as 'that specky twat from Sheffield', Hawley is an absolute superstar.  In the ideal world, he would sell more records than U2.  With his slicked back hair, his twangy guitar style and his rich, baritone crooning, Hawley evokes an earlier age.  And never better than on this song, a slice of pure romance about one of Sheffield's old department stores and a historic meeting spot for the city's youth. 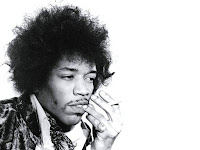 My, it's a rockin' selection this time round, for some reason.  Jimi needed to be in the top twenty somewhere, and this is the track for me - a track that doesn't outstay its welcome, that rocks like a mother and that demonstrates just what a fine guitar player Hendrix was.  Of course, describing Jimi's guitar playing as 'fine' is like describing Zinedine Zidane as a 'capable' footballer.  He was the best.  Voodoo Chile was one of the final songs recorded with the original Experience, before Jimi moved on to looser, jazzier and funkier work - but this, for me, is the peak. 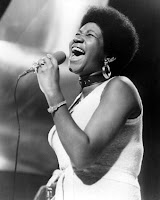 And changing the mood completely, it's the Queen of Soul at her most soulful.  By some considerable distance, Aretha is the best female singer the world has ever seen - in any form of music.  This is an uncontestable fact.  Whenever any X-Factor wannabe starts warbling in a Mariahesque way, in the mistaken belief that the amount of soul in a performance is directly proportional to the number of notes you can squeeze into a single line, she should be slapped firmly across the face with a copy of Aretha's Greatest Hits and locked in a darkened room with the CD until she learns the error of her ways.  Angel is just a beautiful song, written by her sister, with a (no doubt contrived) spoken intro that sets the scene perfectly.  In fact why am I writing this?  Rather than get into a long, drawn-out thing, I think the melody on the box will help me explain.  It's there for you. below - just listen.

Hi Paul, had a quick go at my top 25. Probably have at least 15 changes if I did it again next week - but as with Simon's, these are more emotional connections than endorsments of greatness.

In no particular order...

2. Rush – The Spirit of Radio
The sound of my O levels! Just sounded out of this world at the time. Maybe hasn’t worn so well.

3. Drive by Truckers – Gravity’s Gone
The masters of alt-country/Americana.

6. Metallica – Enter Sandman
Just gloriously powerful and a personal reminder of my biking days and the White Horse in Droxford.

7. Led Zeppelin – What is and what should never be.
After the high of “Whole Lotta Love” the quality never diminishes with the less obvious second track on the second album.

11. Gil Scott-Heron – The Revolution Will Not be Televised
Always had a soft spot for Gil. Go see him live and hope he’s not incoherent on crack (assuming he’s out of jail).

12. Neil Young – Like a Hurricane
The king of proto-grunge. The Live Rust version is the killer. The ragged glory.

13. Run DMC – Its Tricky
You just need to take the laces out of your Adidas and move with it.

14. Squeeze – Up the Junction
Pop at its best. Who needs a chorus with hooks like this?

15. Stone Roses – I am the Resurrection
Biblical. Glorious.

16. Bob Dylan - Tangled up in Blue.
The master of poetry in music at the top of his game.

17. Hard-Fi – Hard to Beat
Just a fantastic and joyous piece of pop from Feltham’s finest. Makes me fell young (again).

18. Billy Bragg – A New England
One of my routes out of heavy rock. The man with the music and the message. Now less the Bard of Barking, more the Bard of Bridport!

19. Stiff Little Fingers – Alternative Ulster
The scene is a local rec somewhere in the South Hampshire conurbation around 1980. A bottle of cider, 10 Embassy No.6, some local girls (if you are really lucky), a cheap mono tape player, and SLF (to be fair could have equally been the Undertones, Clash, Jam, Pistols, Sabbath, AC/DC or Lizzy - we weren't rigid on youth cults!). A perfect night out for a 15 year old growing up in Fareham.

20. The Faces – Stay With Me
Just try and stay still. The inspiration for so much good time rawk and roll since. Not so PC mind…

21. The King Blues – I Got Love
You know you’re getting old when your 12 year old turns you on to something really great.

22. Johnny Cash – I Walk the Line.
Three important things happened in my 30s. I got married, had kids and realised not all country music is crap. Especially not the man in black.

24. The Beatles - In My Life.
So hard to choose a choon. Probably my favourite Lennon track, although there is some debate about the extent of Paul’s input to the melody. I this a true Lennon/McCartney song?

25. Pop Will Eat Itself – Def Con One
Spent 5 years thinking this was the best thing ever recorded. I think I may have been wrong. Well for old time’s sake...

Good list Stu - PWEI excluded! Most of those would be at least bubbling under on my list...