And so the challenges continue.  This time, my challenge to Simon was to name his ten favourite riffs.  I put it to him this way...

"Right, after a lot of indecision and prevarication, the next challenge is out there.
And it's the Riff.  The guitar line (and it has to be the guitar line) that turns a good song into a classic.
I want your top ten riffs.
No more than two or three bars.  Played to death by young boys in guitar shops.  Long of hair, behatted and beaded, no doubt.
I'm not talking solos here, I'm talking riffs.  Ba-danga-danga-da-dang dang.  Ba-danga-danga-da-dang dang.
You know what I mean."

Simon's response to the challenge is here -and mighty impressive it is, too, avoiding the obvious and embracing the concept in equal measure.  Including a number of riffs that I should have thought of as well.

As it is, there was only one riff on Simon's list that was in my provisional ten - Seven Nation Army - so I have adjusted my list accordingly.  I similarly decided that Smoke on the Water (and one or two others) were a little too obvious to include.

So - ten riffs to send you running to the air guitar shop.  In no particular order, of course... 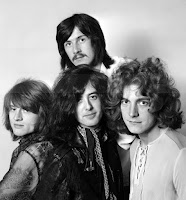 And here's me saying I was going to avoid the obvious.  But how could you not include this?  What swung it was the moment in the recent documentary, "It Might Be Loud", where Jimmy Page plays this riff to an audience of The Edge and Jack White, both of whom know a good riff when they hear one.  The look of joy on their faces as the power chords rang out was probably the highlight of the film. 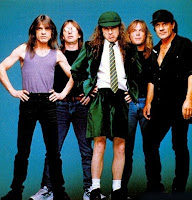 Back in Black - AC/DC

I very nearly went for 'Whole Lotta Rosie' but of course could have gone for just about any AccaDacca tune. In the end though, it had to be 'Back in Black', if only for its punchiness and attack.  The quintessential AC/DC riff.

When I was editing down the individual tracks on this list to the essence of their riffs, most could be distilled into ten or twenty seconds, max.  Enter Sandman - I just kept the edit playing and playing, as the riff develops and grows.  Over a minute of pure riffage before I pressed 'cut'. 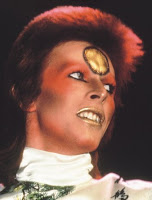 Generally, Glam Rock gave good riff - and this is David Bowie right in the middle of his Glam phase.  Probably the only riff to be in the charts at the same time in two different forms - exactly the same riff graces Sweet's 'Blockbuster'.  But this is the definitive Glam riff, courtesy of Mick Ronson, of course.

She Does It Right - Dr Feelgood

Wilko Johnson, with some spectacular pub rock riffage, mastering the art of playing rhythm and lead at the same time, in the same riff.  I've seen footage of him playing this riff live, and I still can't work out how he does it.  A simple riff on the face of it, but deceptively complex to master. 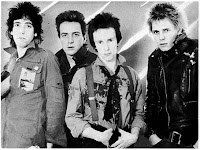 This is what you get when punk meets heavy metal - The Clash produced by Sandy Pearlman.  It irked the purists at the time, but Pearlman added weight and depth to the band's natural intensity, to produce this master opening to the album.  It was even better live. 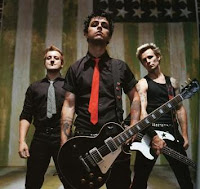 Playing this riff immediately after The Clash, and the similarities are obvious.  Not just in the choice of notes (there are only so many to choose from, after all) but in the depth and intensity.  Often unfairly lumped in with the mass of lumpen Tattoo'd American Punk bands that came through in their wake, this riff kicks off an album of intelligence and variety that transcends its genre. 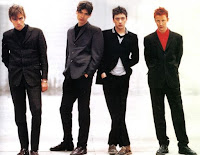 Another great riff from a band not really known for their riffage.  It also has the classic riff 'trick' that gets me every time - playing the riff once with little tone, then hitting the 'gain' pedal (turned up to eleven) to really hammer the point home.  It's got 'woo hoo's' as well.  Set the crowd alight at Glastonbury last year.  Not that I would know, I was in the Acoustic Tent listening to Georgie Fame. 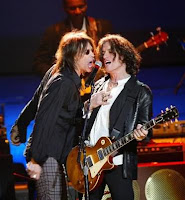 I love this riff - deceptively simple, just four notes played pretty much in sequence four times - but it's perfect in its simplicity and when combined with the opening drum pattern and hint of turntable scratching, sets up the mash of rap and metal perfectly. 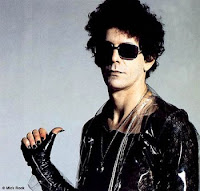 This is the lodestone - essence of riff.  Three chords - D/A/G - with perhaps a Bm in there as well - it doesn't get any simpler.  Can be played gently (as in the VU original) or as an out and out rocker.  This version - from Lou's 'Take No Prisoners' live album - is at the rocky end of the spectrum and none the worse for that.

(Oh - and bonus points to anyone who knows where the title of this post comes from...no Googling now, you'd just be cheating yourself...)
Posted by Paul Waring at 3:39 pm

Nice one Stu - released aeons ago - when I was still a student in Sheffield! If I'd bought a copy I could probably retire on the proceeds now!

Interestingly, I met - and spoke to - Joe Elliott, at a BDO clients do a couple of years ago. Didn't recognise him (last place I'd have expected to see him!) but he was a really nice, down to earth bloke.

That'll be their first ep, released on said label, of course...