Another deeply troubled individual who had everything, but ultimately succumbed to his demons.

I have a theory about Michael Jackson.  For all his talent, all his success through the '70s and '80s, all the millions of copies of Thriller and Bad sold, all the groundbreaking videos...this was a man who knew, deep down, that he'd recorded his best song when he was eleven years old.  And that everything since failed to measure up.

Now all that, of course, may be nonsense.  Apart from the incontrovertible fact that 'I Want You Back' is the best thing that Michael Jackson ever recorded.  Which is nothing to be ashamed of - it is a perfect slice of pure pop music.  Everything fits perfectly - even the fact that Michael is wincingly out of tune in places adds to the charm of the song. 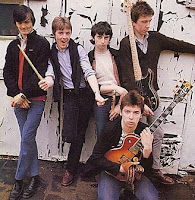 Another perfect slice of pure pop music.  Derry rather than Detroit - The Sound Of Young Ireland.  Proof - if proof was ever needed - that the simplest music can be the best.  Jeez, even I can play the bass part all the way through!  This is music stripped down to its essence - the most obvious of chord sequences paired with the tritest of boy-meets-girl lyrics.  But that's what is perfect about it - everything about the song is just right.  The group seem to play the song with an air of wonder as well - like 'how the hell did we do this'?  John Peel's favourite song?  Maybe - certainly one of mine.

I have so many different versions of this song it is untrue - sixteen different artists including Elvis Costello, Aretha, The Flying Burrito Brothers, Ry Cooder and Percy Sledge - as well as the writer of the song, Dan Penn.  On a live recording I have, Dan says he is often asked which is his favourite version of the song - "As if there were any other version than James's".

James is of course James Carr - probably the most obscure of all the artists in my top twenty (all right, twenty-five) list and, yet again, another deeply troubled man who suffered from bipolar disorder all his life.  But a great soul singer who - with just a few exceptions - was badly served by his choice of material over the years and was often overshadowed by the established soul greats - Otis, Wilson, Solomon etc.

But he recorded the definitive version of this wonderful song.  A classic tale of two lovers, cheating on their partners, meeting clandestinely and guiltily.  Knowing that what they are doing is wrong, and they will eventually get caught, but doing it anyway - because they have to.  And it resonates with me - I've been to the dark end of that street myself.

2:  Another Girl, Another Planet - The Only Ones 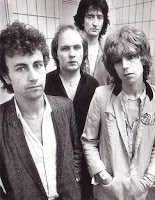 I blogged a long time ago about The Libertines, and came to the conclusion that, essentially, they were The Only Ones de nos jours.  Except The Libertines never produced a note that could touch anything written by Peter Perrett and his group.  Especially not this, their finest moment, with the greatest opening guitar figure - ever.

A strange group even by the standards of the late '70s, The Only Ones had served their time in various prog and blues outfits before coalescing behind professional junkie Perrett.  They had the musical chops, he had the tunes and the lyrics, and they never came together more exhuberantly than in this three minute blast, although they are by no means one-hit wonders, as a tour round their first three albums would clearly demonstrate.

I saw them live once, at Sheffield Poly in 1978.  Ragged and tetchy, they eventually launched into a full-blooded scrap on stage, leaving Perrett to finish the set solo.  The self-destruct button was well and truly pressed that night, and I would guess on many other occasions. 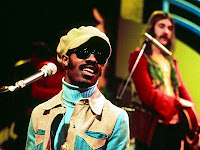 Today, this is the greatest record ever made.  On most days, it's still going to be there or thereabouts.  I defy anyone not to start moving something when the opening clavichord stabs start playing.  What's so great about Superstition?  Primarily, it's the groove, I think.  It's also a hugely complex song - deceptively so, until you start to analyse it (search on YouTube for a short film explaining the sixteen or so different clavichord parts making up the opening riff).  Lyrically, it's all over the place ("If you believe in things you don't understand then you suffer - Superstition ain't the way") but that doesn't matter.

I find it so difficult to explain what is so great about this song that I'm not going to try any more - just watch this.  I've posted it before but any excuse.  Anyone wondering whether it will be worth seeing Stevie at Glastonbury this year - just watch and learn...

Labels: Jackson 5, James Carr, Stevie Wonder, The Only Ones, The Undertones