Day 10: Of Toads and Strategies

If ever you needed proof that iTunes selects the day's soundtrack at random, today's choice should give you just that. The second of two freebie CDs containing cover versions of Beatles songs, I'm currently grooving to Cheap Trick covering Magical Mystery Tour. In the next hour we will be going from the sublime to the ridiculous, from Wilson Pickett's version of Hey Jude to Harvey Averne (who?) doing I Feel Fine. With many other delights in between. 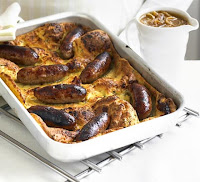 Well, the toad in the hole was probably a '6/10 - could do better' last night. I should have trusted the recipe and left the (slightly runny) batter alone - the extra flour I added meant we ended up with a 'hole' that rose in all the right places, but was a touch rubbery in the middle. In contrast, the 'toads', Tesco's finest Pork & Leek, were excellent - very meaty with just a hint of herbage on top. Onion gravy more than acceptable although the ratio of onion to gravy needs to be revisited! (That's not mine opposite - mine looked better - especially the gravy!)

Jekyll continues to impress - half way through now, and looking forward to the rest. Will definitely keep us going until the next series of Dexter drops on the mat.

Lousy night's sleep last night due to the wind (no, nothing to do with the toad in the hole...the wind outside), the bang of a gate keeping me awake. Cursing the neighbours, but of course it turned out to be our garden gate causing the problem - despite the bolt being padlocked across, the supporting post had moved sufficiently in the wind to dislodge the bolt from its moorings. So a quick fix this morning with some plastic cord that will hopefully keep the thing shut tonight. And hopefully the neighbours will not be cursing us tonight!

In my new role as booking agent to the gang, it's looking like Latitude might be a goer, and also Depeche Mode in November (depending on the presale rush tomorrow). Coupled with Glastonbury, Elvis Costello and the Pet Shop Boys, it's already looking like another good summer on the gig-going front...always assuming new working arrangements don't interfere!

On that front, one of my fellow redundantees tipped me the wink about an opportunity in Manchester that has been duly applied for today - thanks Graeme! - so we'll see how that one pans out. Salary somewhat lower than previous, but a decent high profile role that fits well with stuff I've done in the past so could be a goer.

Those of you who are familiar with the work of Brian Eno may be aware of a technique he uses in music production called 'Oblique Strategies'. Essentially a set of cards with gnomic instructions written on each card. The theory is that you select a card at random, and use that card to inform your work that day. Inevitably 'Oblique Strategies' are available online and, more specifically, as an iPhone application that I have downloaded. So let's, just for fun, see what today's pronouncement is.....

Hmmm....perhaps using Oblique Strategies to help me find a new job isn't the way to go... might revisit this approach though!

Since it's a bit quiet today, I'm going to bore you with the details of a newish music tool on t'internet that might just change the music industry forever. Or not. Anyway, it's called 'Spotify' and you should all download it immediately. Essentially, you download a piece of software that looks and feels a bit like iTunes, and once it's on your desktop (or laptop), assuming you have a half-decent internet connection, you have searchable access to a vast amount

of music - all on a legitimate basis. The basic model is totally free, but will interject adverts on an irregular basis. You can pay a subscription to avoid the ads, but (currently at least) they are very unobtrusive. Can't quite see how the business model works (if at all) but enjoy it while you can. It's like having an iTunes library with literally millions of albums in it.

Back on the bass today - happily mastered the (admittedly easy) bass line to 'Summer Lovin', on the Grease soundtrack. 'She Bangs The Drums' by the Stone Roses will, I think, take a little longer...
Posted by Paul Waring at 4:31 pm

i'll say it should take a little longer! bit more technical that int it?? could be worse i guess, should have a crack at my generation or something by magazine with mr funkadelic on bass (whatever his name is??)

Also, my tutor for media tech (basically a fancy name for rudimentary i.t) was telling us just the other week about how he got 'this thing called spotify' and how amazing it was! co-inky-dink?