Kicked back and watched the first episode of 'Jekyll' last night, with a cheeky mid-week bottle of red on the go. I'll have to be careful that the midweek drinking doesn't get out of hand - if only from a cost point of view - but at the moment there's a bit of 'I can, so I will' about it.

Really enjoyed Jekyll as well - not a massive fan of James (I keep wanting to call him Rab) Nesbitt, but certainly in the first episode he's handling the different elements of his 'personality' pretty well. Also enjoying watching Gina Bellman (remember Blackeyes?) and Zoe Out Of Eastenders!

Anyway, far too nice to sit in and write job applications this morning, so off to Cheshire Oaks for a bit of retail therapy. Started the day with cappuccino and muffin again, sat in the sun reading the papers, not missing the daily grind one little bit! The justification for going out was to get Anniversary/Mothers' Day cards for the weekend (which I did) but a couple of other little things slipped into my bag - just necessities, you understand. I also picked up a tent pole repair kit to put right the little mishap we had with Matt's tent at Glastonbury last year...

Back home, and finished off the Carrot and Coriander soup I'd made a while ago - no more homemade soup left in the freezer, so I need to experiment a bit more, I feel. Will keep you posted.

And then back to the ukulele. C, F and G7 chords nailed, and perfectly acceptable versions of Happy Birthday and Twinkle, Twinkle, Little Star performed to the cat's bemusement. Available for weddings, parties, bar mitzvahs etc.

The bass may take a little bit more time to fully come together. 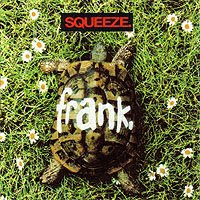 That and 'Can of Worms' (about the new man in a single mother's life) are the standout tracks for me - grown up songs about grown up things, handled sensitively and intelligently. With tunes and melodies to die for.

Not so sure about Dr Jazz though, Jools....

I saw Squeeze very early on in their career, third on the bill at Sheffield City Hall supporting Eddie and the Hot Rods and Radio Stars (it was a very long time ago, ok?). I think it's fair to say that they were still finding their feet at that stage, whereas Eddie and the Hot Rods were about 12 minutes through their 15 minutes of fame. We had all really gone to see Radio Stars, who we were all convinced would be The Next Big Thing - but with hindsight, a couple of novelty singles and a patchy first album were not the best grounding for a massive career in rock. And so it proved.

So here I am writing concert reviews from thirty years ago. Back to more important matters, then!

Another call from a recruitment agency today - possible opportunity at a company in Cheshire that is being discussed tomorrow. May or may not be a goer - certainly a company I'd like to work for - but in any event it's nice to be getting these calls and to know that there are things out there. We'll see.

Mrs W dining out this evening so the remote is mine! Hancock is sitting there unwatched, so might give that a go - whilst polishing off a chunk of Tesco's finest pizza and resisting the siren call of the second bottle of red...
Posted by Paul Waring at 3:10 pm