Day 11: Cooking. Doesn't get. Tougher than this.

You'll have to forgive me if this is a bit disjointed today - I'm writing this in between trips to the kitchen to stir my pots. Big pan of broccoli and Stilton soup on the go and I need to check it's not boiling too vigorously on a regular basis. 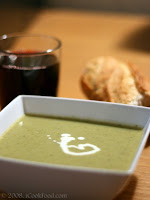 Very nice recipe and actually quite easy - fry off a couple of onions in some butter along with a finely chopped potato for around ten minutes until the onion has softened (but not browned). Add a couple of heads of broccoli (just the florets, not the stalks) and toss round until all the butter has been soaked up, then cover with stock (I'm using chicken, but use vegetable if you want to be purist about this. Also, use liquid stock, not cubes. If you can't/won't make your own, you can buy cartons of stock from all good supermarkets - and probably from some bad ones as well.) Add a spot of water if the stock does not cover the veg, then cover and simmer gently until all the veg are suitably soft and breaking up. Take off the heat, then give the mixture a good old blend with one of those hand blender things. What do you mean, you haven't got a hand blender thing?

When the soup is blended to your satisfaction, put back on a gentle heat and break up a big lump of Stilton into small chunks. (How big a lump? I don't know - as big as you like but probably not one of the big round ones. I'm using about 250g today.) Add the Stilton gradually to the soup, stirring as you go, until it has all melted. Taste and season to your liking. Finally, add a couple of tablespoons of double cream and stir in gently. Don't let the soup boil once the cream's in!

There you go - job's a good 'un. You learn stuff reading all this - and all for free!

So yeah, all quiet on the job front today. Went out early for groceries and bought a copy of the FT, but nowt of interest in there. Spent some time registering formally with the recruitment agency who have been most attentive so far, and sending that back to them. 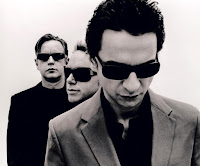 Also managed to pick up five tickets to go and see Depeche Mode in Manchester in December - Kevin and his mates coming up from Birmingham, looking forward to what should be a good night. Depeche are one of those bands that (for me, anyway) have got better and better as they've matured - from what were quite lightweight synth-pop days to a very dark and intense band in their middle years. Dark and intense obviously loads better. Whilst I'm glad Dave Gahan has got over his various addictions, I hope he's managed to do that without losing the 'edge' to his performance. 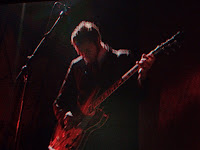 Interpol currently playing in the background - another quite intense band who have spent a lot of time listening to Joy Division and their ilk. Saw them live at Latitude last year (see opposite), where they headlined the final night to great effect. On the first few listens, they can sound a touch samey, but perseverance uncovers a band with a good ear for a tune and a nice line in lyrics. "Our Love To Admire" is the most recent album, but I would also recommend "Antics"to you.

Started a new book last night - Anathem, by Neal Stephenson. Bloody hell, it's big. 900-odd pages big. But it comes with a good reputation and pedigree - I read his 'Cryptonomicron/Baroque Cycle' books last year and enjoyed them a lot, although they are heavy going at times. The books are densely plotted with a lot of technical and historical detail included, and can be difficult to get into, but if you persevere than they are a very satisfying and rewarding read. Let's hope Anathem is equally rewarding. Looks like I've plenty of time to find out...

So what's Brian Eno got to say to us today?

"Only a part, not the whole"

Well I only used the broccoli florets, not the whole head - is that what you mean, Brian?

Right, off to crumble Stilton...
Posted by Paul Waring at 4:13 pm