...but let me tell you it's better than digging a ditch.

But only just. Yes, Sunday, sun shining and 'Car Wash' day at Waring Towers. It's actually not so bad a job when the weather's like this, and we've got one of those pressure washer things which takes a lot of effort out of the job. Just Mrs W's car today - mine can stay dirty.

Watched the England game last night - had to watch it on t'internet as it was only being shown on Setanta. Actually got a pretty good quality stream of 'Star Sports' from somewhere out in the Far East - strangely all the pre and post match analysis is in English, but the commentary is all in foreign. Very difficult to work out exactly what, or who, the commentators were talking about at any point in time, the only thing I could pick up was the references to Peter Crouch, who the commentators seemed to be calling 'Crouchy' in a very familiar fashion.

Very disappointed none of the Everton lads got on the pitch - in fact, apart from the second goalie sub, they were the only subs who didn't get a run out. At least they didn't pick up any injuries - unlike the forward line, who were dropping like flies. Also nice to see Martin Skrtel have an absolute nightmare. Pleased to see The Boy picking up a couple of goals as well - thought he ran the match and was by far England's best player. See, I'm over it now.

Then up early this morning to watch the Grand Prix. Luckily, I went by the time on my phone rather than the alarm clock, as the whole 'clocks going forwards' thing had completely passed me by. Entertaining stuff - well as entertaining as the motor racing ever gets, I suppose, and always good fun to see a couple of the leading cars bang into each other with just a couple of laps to go. And also nice to see Jenson Button winning - and in some style as well. This being Formula One, there are apparently all manner of appeals and counter-appeals going on at the moment which may affect the final result, but it looks like the racing may be a lot more competitive than it's been for a long time.

Recipe watchers - not too much to report today I'm afraid - Mrs W picked up some cordon bleu chicken from Marks & Sparks today, although I shall be preparing a cauliflower cheese to accompany said chicken. If I remember (and if it is suitably photogenic) I may take a picture for your delectation later. 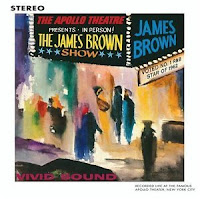 Today's soundtrack is generally accepted to be one of the best live albums recorded - ever. And it is a mighty fine disc, with the Hardest Working Man In Show Business at the height of his game. Recorded at the Apollo Theater in Harlem in 1962, James and his band, The Famous Flames (who are tight as a gnat's chuff throughout) play a wonderfully well judged and paced set and carry the audience in the collective palm of their hand throughout. The album is here on Spotify - and below, a clip of Mr Please Please Please himself in action. Nice footwork sir! Shake and Shimmy!