When I started this blog, the intention was partly to ensure I did something creative, that required a bit of thought and effort, and, frankly, to give me something to do. I assumed I would be largely 'howling into the void' - not for one minute did I think people would start reading the thing.

Now, I find, I am developing a small audience for these ramblings. Not only that, an increasingly vociferous and demanding audience. I am now getting requests - and demands - for namechecks and for particular content in the blog. The pressure!

So, firstly, a big 'shout out' to James and crew in Manchester. Thank you for keeping me involved in stuff - whilst I have given up on the fantasy football as a bad job, I intend to keep my position at the top of the leaderboard for the calendar quiz.

And secondly, the recipes. I try to theme this around the job search, the music and the football - but no. It's recipes you want. So recipes you shall have - but not today I'm afraid. Tonight's tea is currently on the go - it's curry night tonight at Waring Towers - with three separate dishes bubbling away gently. 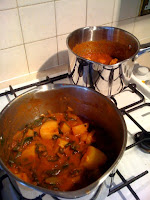 Dish number one, a sag aloo - potatoes and spinach simmering in a spicy tomato base. I'm still amazed at the way spinach cooks - the bag of spinach that went into the pan was as big as a pillow - now, you can just about discern a few green strands in amongst the spuds.

Dish number two - a chicken tikka masala (for Mrs W, who knows what she likes). Chicken cooking away in its sauce, just waiting some fresh coriander and cream before serving.

The third dish is the interesting one - a bit of an experiment involving lamb and certain other ingredients. If it's any good I'll give you the recipe tomorrow. If not, I might just pretend it never happened.

Oh, by the way - the broccoli and Stilton soup yesterday - is absolutely to die for! Make it now!

Right then - other stuff. The inevitable happened today. You try and avoid it - look for excuses, other things to do - but eventually you just can't put it off any longer.

I did the ironing.

Bloody hell, it's hard work. But strangely satisfying - when you've finished. Up to now, we've sent the ironing out - bag it up, it gets collected, ironed and dropped off. All we have to do is hang it up. But in these straitened times, this is probably an expense we can avoid, so I volunteered. Mrs W, bless her, suggested we keep on sending it out - but no, I can do this. And I can. And did.

Obviously, I had the music playing in the background while I was dashing away with the smoothing iron. For some reason, iTunes decided to play a compilation of easy listening music from the '50s and '60s. So I'm ironing away to Perry Como, Matt Munro, Shirley Bassey and Tom Jones. It was like being whisked back in time, listening to 'Two Way Family Favourites' (ask your mum) on a Sunday.

Right now though, we are listening to EMF. Remember them? One hit wonders from the early nineties - 'Unbelievable' was the hit single (which is on this album). No idea why I bought the album in the first place - probably on the strength of the single and some good reviews in the music press. It's actually not bad, but very much 'of its time'. I went off EMF very quickly, actually, following an article in the old music magazine 'Select', which seemed to have quite a soft spot for the band. The journalist was accompanying the band on tour and took great delight in describing the 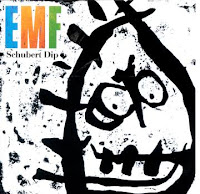 merry japes that the band got up to...including, in particular, the antics of the keyboard player, whose 'party piece' was to insert various fruits into, er, 'unusual' parts of his anatomy. You wouldn't want to go near the fruit salad on this tour, I promise you. Put me right off the band and, for that matter, the magazine.

Today, Brian says "What are you really thinking about just now? Incorporate"

Ok Brian - I will. I'm actually thinking that Schubert Dip is not that bad of an album. So if you want to investigate further (and took my advice and downloaded Spotify) you can listen to the album here.
Posted by Paul Waring at 4:31 pm

Sorry to hear about the unemployment woes, but the daily look into your life is interesting....really!!

Good luck finding a job - tougher times ahead I fear.