Family day today what with it being Mothers' Day and all, so not a huge amount to write about. Probably. 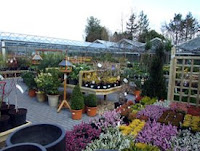 Up and out first thing, to pick up some flowers for my Mum and to buy the Sunday Times (part of my Jobseekers' agreement, don't you know. Bet I can't claim the cost back.) Flowers from The Hollies Farm Shop on the A49 - if you're in the area, then I recommend a visit - it's not the cheapest, but the quality and diversity of the stuff they sell is fantastic. Sunday Times from the garage.

So home for coffee and newspaper - quick review of the appointments section revealed nothing suitable, but at least I looked. Papers of course all missed the big news story of the day - Jade Goody's death. Very sad and all, but is this something the Prime Minister really needs to be commenting on? Hasn't he got an economy to fix?

Then out for dinner with the family - this year at Gusto in Heswall. Again happy to do a bit of free advertising - had a really nice meal in lovely (if warm) surroundings - very pleasant staff as well. Currently digesting the penne arrabbiata as I type. Big thanks to our kid for footing the bill this year - my turn next year when I'm working again!

News came through while we were in the restaurant of Big Red's demolition of Aston Villa. Liverpool worryingly on fire at the moment, but Villa happily in freefall seemingly. At least there will be some pressure on ManYoo that might lead to them fielding a weakened team in the FA Cup - not that I'm clutching at straws or anything.

Selmasongs is the soundtrack to the Dogme film that Björk was in a few years ago called 'Dancer in the Dark'. Film did very little for me and, to be honest, this isn't the first Björk album I would have reached for but hey, iTunes does the selecting - I take what it gives me! That said, it's a decent enough album and am quite enjoying her wailing along in the background.

So, day out at the seaside tomorrow - Mrs. W has taken the day off so we're heading out for the day, probably to Conway, but wherever the mood takes us. Hopefully the sun will shine but I'm not sure the forecasts are great....
Posted by Paul Waring at 8:10 pm