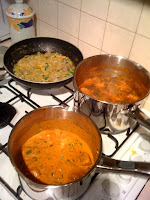 "Not convinced" was Mrs W's verdict on last night's 'experiment'. Not that she tasted any of it, you understand. A look was enough. I kind of understand where she was coming from (you can be your own judge...it's the creamy-looking stuff in the wok on the back burner) but it tasted fine to me. Not that I'll be cooking it again anytime soon - at least not without a few adjustments to the recipe!

So what was it then? I know you're all dying to know. Well, it was a lamb curry, basically. Involving fruit. Specifically, lime, mango and coconut. I wanted to try something different - and there was a (very) old tin of mangoes lurking in the back of the cupboard that needed eating, so...

Bear with me on this. I did do a quick Google search and I did find a recipe using these ingredients - so, with a bit of artistic license, I went for it. Couple of lamb steaks, cut into bitesize chunks, left in a marinade of finely chopped onion, red and green chillis, olive oil, juice and zest of a lime, fresh ginger and some brown sugar for an hour or so. Everything then chucked into the wok and fried rapidly, to seal the meat. I added some powdered coriander at this point as well. Tin of coconut milk added, and the curry left to simmer until cooked, and the liquid reduced to a thick sauce. About halfway through the cooking time, a finely sliced lime (including skin) and the tin of mangoes added. Just before serving, some fresh coriander chopped and sprinkled on top.

You're not convinced either,are you?

Next time, I'd swap the lamb for a white meat - probably chicken - and either drop the mango altogether or insist on fresh rather then tinned.

Somehow I don't think I'll be getting any phone calls about this delicacy!

Enchiladas tonight. Recipe - buy an El Paso enchilada kit and follow the cooking instructions on the box. Actually don't, because that would be a bit dull. Add some green and red peppers and an onion to the chicken because chicken by itself is a bit naff.

Lazy day today - well it is the weekend - mainly sat around reading, and not getting involved in Mrs W's (successful) attempt to get her money back on a big sack of peanuts she bought to feed the birds in the garden. The nuts were 'shrivelled' and the birds were turning their noses up at them. Very picky, the birds in our neighbourhood. And we've already had the jokes about shrivelled nuts, thank you. 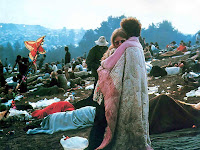 There's a lot in the music press at the moment about Woodstock - apparently it was 40 years ago this year, and a bit of fuss is being made about the anniversary. I dug out my DVD of the Woodstock film and watched, fascinated. And not just by the hippy chicks dancing around with their tops off. I know it was the first festival of its kind, and no doubt everyone has learnt from the mistakes they made at Woodstock, but it makes Glastonbury look like a well-drilled military operation (which I suppose it is, these days). But in the midst of all the chaos, there was a clear sense of community (and peace and love, man) and some fantastic music. A pity it all went to hell in a handcart at Altamont a short time later - but for a time, the hippy dream became reality.

And here's Jimi playing the Star Spangled Banner for the few remaining punters at the end of the festival...

Off to watch the England game shortly - I note none of the Everton trio are in the starting lineup but would be disappointed if none of them made it on to the pitch at some stage - especially Leighton Baines, who has really deserved his call up after some remarkable performances this season. And up early in the morning to watch the Grand Prix. Looks like it could be remarkably competitive this season, and Jenson Button's best chance of a decent shot at the World Championship.

Given the number of Costello albums I've got, it was only a matter of time before one of them came up on the soundtrack. A shame it's one of his poorer efforts, the marvellous 'Shipbuilding' notwithstanding. Off to see Elvis in April at the Bridgewater Hall - with the Brodsky Quartet, so it will be slightly more cultural than my usual fare.

And speaking of culture, if anyone is looking for a cheap fix of the classics, Amazon's download store has Simon Rattle's performances of all nine Beethoven Symphonies available at the moment for three quid. That's right, £3 for nine symphonies. Get over there and fill yer boots.
Posted by Paul Waring at 4:05 pm

Almost like they were being managed by Sven or whatsisname that thinks he's dutch now. Irritating and a half, especially in a friendly in which there are no limits on substitutions!
Might be a bit of a pointless statement but they better get a run against Ukraine mid week!