A darkened room, curtains drawn so passers-by cannot see the ridiculous sight of two grown people sitting with pairs of cardboard glasses perched on their noses.  Plates of food balanced on their laps - food they cannot see owing to a combination of the darkness, and the disorienting effect of a strip of red plastic covering one eye, and a blue strip covering the other.

A film is playing on the television set in the corer of the room.  We realise we are having problems discerning any 3D effect - a problem caused by Mrs W. inserting the 2D version of the film into the player.  Finally the correct disc is in place and we settle back to enjoy the eye-popping visual feast on offer.

Whilst still struggling to get any food into our mouths.

Actually, it was quite good fun.  The 3D effect worked reasonably well, although inevitably the colours in the film were all a bit washed out.  Can't see it catching on though - at least not until the technology allows you to dispense with the silly glasses!

The film was the latest in the 'Final Destination' series - entertaining old tosh, following exactly the same format as the other film in the series (big disaster, Death initially cheated, Death redresses the balance one by one in ever more imaginative ways).  Plenty of scope of course for things (generally sharp things) to hurtle out of the screen towards us - and, quite successfully make us flinch and duck.

A shame we couldn't see our food though, as it was actually pretty damn tasty.  Moussaka today, not fully authentic but a nice recipe you should try.  Hard work though.

To be truly authentic, you should use minced lamb but I chose to go with a 50:50 mix of lamb and beef mince as all lamb can be a bit overpowering.  Brown the mince with some onion and garlic, and season with cinnamon and allspice.  Completely inauthentic, but I chucked some mushrooms into the pot as well.

When everything is browned, add some oregano, chopped (tinned) tomatoes and some passata and leave to simmer and reduce down.

While the meat is simmering, prepare the rest of the dish.  Slice three or four aubergines into rounds about half an inch thick, and spread onto some kitchen paper.  Salt both sides of each slice and cover with more kitchen paper - this will draw any bitter juices out of the aubergine slices.  Then peel and slice some potatoes into thin rounds and rinse in fresh water.  The potatoes need to be cooked briefly to ensure they are fully cooked in the final dish - this can be by shallow frying or by parboiling the slices.  However to save time and effort, I just chucked them into the deep fat fryer for a few minutes.  Don't let the slices brown - we're not making chips here.

When the aubergines are drained, they need to be fried in olive oil, in batches, until lightly browned on both sides.

Finally you need to make a bechamel sauce, using flour, butter and milk.  Add some grated gruyere and parmesan cheese to the sauce as well.

Now you can construct your moussaka.  A layer of mince in the base of a large casserole dish, topped with half the aubergine slices.  The add the rest of your mince to cover, and top with the rest of the aubergines.  Cover with a layer of potato slices, then pour the bechamel sauce on top.  Grate some more cheese on the very top, then stick in a hot oven for around 45 minutes for the flavours to mingle and the top to brown. 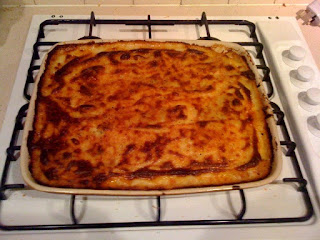 Look at that - Lovely!

Deep Purple were one of my early musical loves and although time has possibly not been kind to them, I still enjoy hearing them now and then.  Fireball is probably slightly overlooked amongst their early '70s canon, falling as it does between Deep Purple In Rock and Machine Head and suffering in comparison, but it is still worth a listen.

Excellent video here - the Purps miming to Fireball on some teeny pop show back in the day - everyone looks like they are dancing to an entirely different song for some reason!

Just wondering how moussaka led you on to "deep purple" and "fireball" - is there something you are trying to tell us about the state of your kitchen?!? Very entertaining blogs as always Paul. Hope you're well. Nigel.