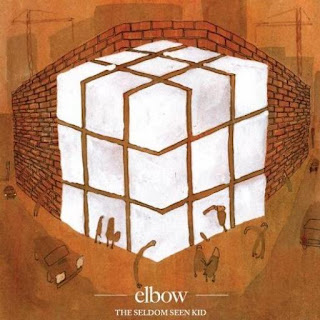 Elbow kind of passed me by for a long time - I'd heard some stuff and kind of passed them off as another dour bunch of near-Mancs churning out identikit medium-paced tunes of no real substance.  Pleasant enough, but not really for me.

That view changed dramatically, one early evening in Suffolk in July 2008, when I saw them live for the first time, performing the bulk of this album.  Another band who played with joy and passion and brought their material to life - culminating, of course, in a mass singalong to one of the centrepieces of the album, 'One Day Like This'.

After that, I took the album seriously and slowly discovered an album suffused with passion, regret, love and - that word again - joy, that lodged itself amongst my all time favourites quickly and easily.

So who is/was The Seldom Seen Kid?  He was Bryan Glancy, musician-about-town in Manchester, drinking buddy of the band who died suddenly in 2006.  The album is dedicated to his memory, and the closing track, 'Friend of Ours', is a moving tribute to him, that perfectly captures the awkwardness of bluff heterosexual Northerners clumsily trying to express affection ("Never very good at goodbyes, so - gentle shoulder charge - love you mate").

But the album is on no way mawkish, including some beautiful love songs in Starlings ("You are the only thing in any room you're ever in"), The Bones of You and Mirrorball.  Grounds For Divorce (opening with another reference to Glancy) adds some grit to the album, with a stunning bass line...and of course, the best 'festival song' written for many a year, the aforementioned 'One Day Like This'.

Ironically, the officially released album may not be the best version.  A year after release, the band went into Abbey Road Studios to record the album live, with the BBC Concert Orchestra and a full choir.  The songs, partially orchestrated on the original album, lend themselves well to full orchestration, giving the album even more polish and depth.

To have one version of a great album should be enough.  To have two brilliant readings of the album is just being spoilt.

So - The Seldom Seen Kid.  One album like this a year'll see me right.

friends of his said...

If you want to find out more aboiut Bryan, his life and music, come and read his memorial blog. Thoughts and love from those who knew him.