The Queen is Dead - The Smiths 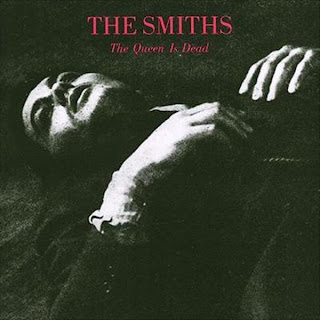 The Smiths - yet another depressing band? Well that's arrant nonsense, I'm afraid. There is nothing depressing about The Smiths - this is (again) one of the most joyous (and funny) albums out there.

Morrissey and Marr both prefer Strangeways, but for me this album represents their peak, when they were still very much a band and the lyricism and music meshed and gelled perfectly.

Firstly the words. Morrissey seems completely at ease with himself on this album - utterly self-aware ("She said 'I know you and you cannot sing' I said 'That's nothing, you should hear me play piano'") and playful ("I didn't realise you wrote such bloody awful poetry"). But at the same time, still able to articulate the angst and wretchedness of adolescence better than just about anyone.

'I Know It's Over' is a classic 'depressing Smiths' song. Except it's not. It's a song for anyone who feels (or has ever felt) alone and unloved - Steven has felt that way as well, and he knows what you are going through. I defy anyone not to feel comforted, rather than depressed, after listening to this song.

But Morrissey does requited, as well as unrequited love, too. Albeit with a degree of obsessiveness that goes beyond the strictly necessary. In the sublime 'There is a Light That Never Goes Out' Steven gets his man(?) and declares his undying love:

But the album is about more than Morrissey's lyrics, although I could quote them all day. It's about the music, and the musicianship of the band as well. Johnny Marr is undoubtedly the finest guitarist of his generation, understated and unshowy, but always appropriate. Listen to the guitar work on 'Some Girls Are Bigger Than Others' - it's sublime. And if that wasn't enough, The Smiths had the finest rhythm section in the land as well. Listen to the drums at the beginning of 'The Queen is Dead' and the bass on 'I Know It's Over' and tell me I'm wrong.