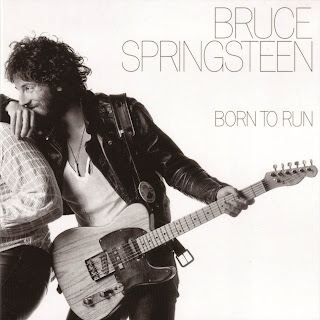 After two critically acclaimed, but relatively poorly-selling, albums, Springsteen felt it was make or break with this, his third release.  Famously, he wanted it to sound "...like Roy Orbison singing Bob Dylan, produced by [Phil] Spector."

As for the rest - certainly the production was decidedly 'widescreen', in keeping with the cinematic nature of the songs, and the layering and complexity of the production certainly brought to mind Phil Spector.  Ironically, the Dylan comparisons that Springsteen had been saddled with in the past were less evident on this album than they had been previously, as he tightened up on the wordplay and allegory, producing a suite of songs that had a clear and consistent lyrical theme.

And that theme?  Well to these ears, it was all about breaking free of ties and constraints - leaving behind the mundane and the everyday - the "town full of losers".  Of course breaking free is a risky business - and some of Springsteen's characters were taking more - or at least different - risks than others.  In Meeting Across The River, the risk comes from dabbling in petty crime and perhaps biting off more than you can chew.  Elsewhere though, the risk is more about failure and disappointment - of learning that your dreams and aspirations are just that, and of being sucked back into the life you were hoping to escape.

But that's the risk you have to take.  The genius of the album is Springsteen's confrontation of those risks - his willingness to do what it takes and the optimism that suffuses the whole album.  He's got his guitar and he's learned how to make it talk - he's gonna get to that place where they really wanna go - and walk in the sun.

Even for those characters left behind on the Backstreets - Springsteen talks of people taking their stand, working all day to blow them away in the night.

On later albums - as he grew older and perhaps wiser - Springsteen speaks of disillusionment and regret at failed dreams.  But on Born to Run, he's at the start of the journey - getting out while he's young - pulling out of here to win.

Here's Thunder Road, performed on VH1 Storytellers.  And what a story it tells.  Possibly my favourite lyric ever.