Blood on the Tracks - Bob Dylan 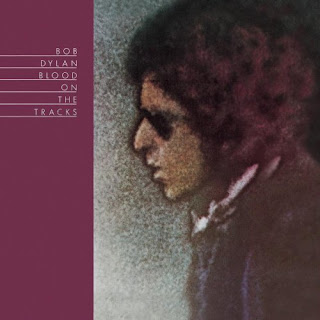 There could have been three or four Dylan albums in this list, but for me, this is his real masterpiece - when both musically and lyrically, he surpassed even himself. Dylan's 'divorce' album, his lyrics are more direct, less allegorical than usual, lending them a power that hits you between the eyes.
The opening trio of Tangled Up in Blue, Simple Twist of Fate and You're a Big Girl Now would grace any album - then to be followed by the icy blast of Idiot Wind, possibly the most vicious put-down ever recorded. Lily, Rosemary and the Jack of Hearts is possibly the best cowboy film never made and Shelter From the Storm, steeped in Biblical allegory, foreshadows Dylan's later 'Christian' period.

There is, of course, nothing straightforward about a Dylan album, and the 'official' release may not even be the best version of Blood on the Tracks out there. Having recorded the album and delivered it for release, Dylan had an uncharacteristic wobble, and re-recorded five of the songs in Minneapolis for the final release. Many would say the the original, 'New York Sessions' album is the better album, with a coherence and 'flow' that results from the album being recorded in one place and time.

But then - that's what you get with Dylan. Sometimes frustrating, wilful and perverse - but always brilliant.

Here's the 'New York' version of Tangled up in Blue - see what you think!