Songs in the Key of Life - Stevie Wonder 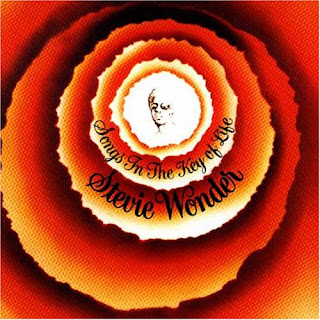 To be honest, I could have chosen any of Stevie's albums from the sequence that began with Talking Book in 1972, through Innervisions in 1973, Fulfillingness' First Finale in 1974 and this stupendous double album released in 1976.  These four albums (six, if you bookend with Music of my Mind in early 1972 and Hotter Than July in 1980 and quietly ignore The Secret Life of Plants) represents possibly the longest sustained period of quality enjoyed by any artist, ever.  And I include The Beatles, The Stones and David Bowie in that.

So why plumb for Songs in the Key of Life, then?  Well really, to take both quality and quantity in one package.  This is surely one of the few double albums that deserves to be a double, that couldn't be improved by pruning to a single album (I'm looking at you, White Album).

Songs... is also one of the most upbeat albums ever released.  The polar opposite of this list's breakup albums, this suite of songs showcases Stevie's happiness in his relationship and the joy of his newborn daughter, his love of music and his God. There is still some grit in the oyster though - in the form of Pastime Paradise (sampled heavily for Coolio's Gangster Paradise) and Black Man.

Love songs aplenty - the gorgeous 'Knocks Me Off My Feet' - surely the most hook-laden ballad ever released, As and Ebony Eyes.

But the album peaks with the upbeat centre of the first disc - the double whammy of Sir Duke (named for Duke Ellington) and I Wish - even this left/leaden-footed white boy can't resist the brass opening of the former, or the loose-limbed funk of the latter.

This is Stevie at his peak - and what a peak.

Sod it - it's a double album - have two videos.