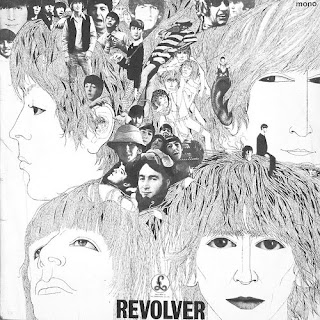 How to pick one Beatles album from all the others?  Clearly The Beatles have to be in the top ten, but which one?  On another day, it could have been Abbey Road, or maybe Rubber Soul - Hard Day's Night, even (but never Sgt Pepper).

But today - and to be honest, on most days - it has to be Revolver.

Revolver was the album where The Fabs grew up - extending themselves beyond their Beatlemania beginnings, but still a band, before the self indulgence and bitterness took hold.  Their individuality was beginning to show through more and more (the 'John' and 'Paul' songs are obvious throughout) but they are still clearly working as a team - pushing each other to heights they'd not previously reached.

Highlights?  For me, John's maturing work in Tomorrow Never Knows, And Your Bird Can Sing and She Said, She Said - but Revolver is more about Paul's work when taken as a whole.  Eleanor Rigby is a masterpiece by any standards, and in Here, There and Everywhere and For No One, Paul produced two of his most moving ballads.  Finally Got To Get You Into My Life is one of the most joyous songs The Beatles - or anyone - ever produced.

The biggest irony of course is that the best 'Revolver' track never made it onto the official album.  Snuck away on the B-side of Paperback Writer, 'Rain' may well be one of the best songs The Beatles (or anyone) ever recorded.  If nothing else, it provided Liam Gallagher with a vocal style that gave him quite a nice career, thank you very much.