Boys and Girls in America - The Hold Steady 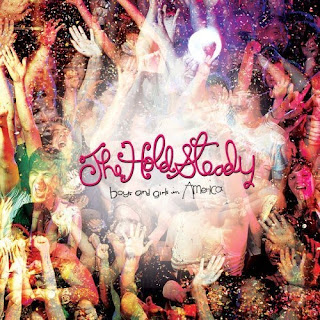 Moving away for a time from the established classics, this album just had to be in my top ten.  The Hold Steady are one of my favourite live bands, and this is their best album, capturing the joy and exuberance of the band perfectly.

The themes are not new - largely focusing on relationships, drink, drugs and the Mississippi River and the recurring characters Charlemagne, Gideon and Holly.  The songs are wordy - and spoken rather than sung - but with fantastic, complex interplay between the guitar and keyboards that suggests Born to Run era Springsteen as much as anything else.

My first exposure to the album was live, in a muddy tent on a cold, rainy June day at Glastonbury.  They warmed my heart, and continue to do so.

The lead-off track, 'Stuck Between Stations', gives my blog its title and my phone its ringtone.  How much more can a song be loved?  And how many other songs have the wit and intelligence to reference both Sal Paradise and John Berryman?

Whilst there is something incongruous about a bunch of, er, geeks in their mid-thirties singing songs about teenage lust and drug experimentation ("...it started recreational, it ended kinda medical..."), somehow it all just works.  It's almost a self-help guide for teenagers ("You don't have to deal with the dealers, let your boyfriend deal with the dealers") that neither preaches nor judges - but celebrates that all too brief period in your life when all you have to worry about are girls, boys, music and your narcotics of choice.

If I was ever lucky enough to have been in a rock and roll band, this is the band I would have wanted to be in!