Today's soundtrack:  Magazine - Maybe It's Right to be Nervous Now

Well I'm feeling the impact of all that heavy lifting yesterday on my poor aching bones - I'm getting too old for this sort of thing.  As a labourer, I make a very good accountant.  Even the early morning routemarch with the dog (in glorious, crisp autumn sunshine) probably compounded, rather than eased, the stiffness in my joints.

Anyway, the Neatest Skip In The World has now been taken away.  The bloke who came to collect it was nice enough, but keen to tell me he'd been delayed by a hospital appointment.  I made the cardinal mistake of asking if everything was ok.  Which gave him the opening he was looking for to tell me about the tube he'd just had inserted down the eye of his, er, "needle" and what they found lurking in his bladder.  I then got a few minutes on his micturatory adventures before he finally confirmed that, happily, it wasn't all that serious.

I bet he'll be regaling everyone he meets today with the same story.

Off to Birmingham this afternoon, for an evening meal with a couple of mates - one who lives there, and another who is visiting in a 'professional' capacity for the duration of the Conservative Party conference.  This will be, I think, the third year on the run we've met up during the conference - last year it was in Manchester, effectively my 'home' venue, and it was Brum again the year before that.

Regardless of political affiliations, these events are very strange things to be around - large parts of the city centres blocked off, armed police on the streets, the odd (very odd) well-known face to be seen...and then all the party faithful, all dressed to impress and carrying an innate air of superiority around with them.  This was particularly noticeable two years ago, the first conference following the election "victory", when there was a barely-concealed sense of triumphalism and glee about the event.  I suspect the atmosphere will be a touch more subdued this time round.

If it isn't, it bloody should be.

Four or five years ago, the three of us were working together for the same employer, albeit in different cities. An employer who managed to dispense with our services, one by one.  Their loss.  At least all three of us have managed to get back into gainful employment - some quicker than others - and I think its fair to say all three of us are a damn sight happier as a result.

Driving tonight, so Coca Cola will be drunk, and something tasty will be eaten.  The world shall, no doubt, be put to rights.  I shall then be driving back, gassy but happy, to my sparklingly clean, ordered, and empty, garage. 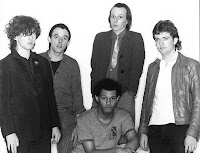 The wonderful Magazine are playing as I type this.  God, I love this group, and always have.  They were the first group who convinced me that punk was not necessarily a musical cul de sac...that something else - intelligent, mysterious and edgy - could evolve from the three chord thrash but still be completely different to what had gone before. 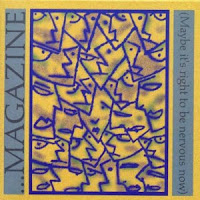 Magazine took the punk attitude, added funkiness into the mix via the magnificent Barry Adamson, introduced a new kind of 'guitar hero' in John McGeoch, and were not too proud to include fine synth and keyboard stylings from Dave Formula.  Four great albums, and then...nothing, for the best part of thirty years.

They reformed a few years ago and I saw them a couple of times (in Manchester and at Latitude) and they didn't let me down.  Devoto less spiky than in the past, but just as oblique and challenging.

Maybe It's Right to be Nervous Now is a box set, collecting together alternative versions, b-sides, peel sessions and the like.  Interesting rather than essential - what you really need is the first four studio albums.

From the first album, Real Life, here's 'The Light Pours Out Of Me'.