These boots are made for walking...?

The problem with buying new walking boots is, well, that you have to walk in them.  And whilst I know that in a couple of months they will feel like a pair of favourite slippers on my feet, I know equally well that I will have torn my feet to ribbons getting them to that stage.  T'was ever thus with new shoes.  I type this, dear reader, with a pair of throbbing heels that will continue to throb until the boots - or my feet - are completely broken in.  Ouch.

Still, I gritted my teeth, and the dog and I dashed up to the forest for our daily constitutional.  And today I took the camera as well!

(The swamps of Cheshire shown in the picture above.  Small boy playing banjo just out of shot.)

Sore feet aside, it was a lovely walk, with Archie again failing to catch any wildlife.  He did find a few other dogs to bark at, although strangely this seems only to be a problem when he's on the lead - off the lead, he'll be charm personified.  If sniffing another dog's arse can be classified as 'charming'.

Apparently the whole walk burnt off 321 calories (according to my 'special app'), which, I tweeted, would allow me to look at my cheesecake for about thirty seconds.  Ah yes, the cheesecake.  You were waiting for an update, weren't you?  It is currently sat in the fridge, awaiting the return of Mrs W from work.  I am not allowed to sample in advance of her return.  Whilst it looks fine in the tin, I have some concerns as it did 'brown' a bit in the oven (An hour, Nigella said - but check after 50 minutes.  I checked after 50 minutes to find I should have checked after 40 instead).  Still, we'll see.  I shall update later with more details.

Mrs W is now home and the cheesecake has been cut.  And sampled.  Ohmigod.  Quite apart from having more calories per slice than eighteen stones of lard, it is actually rather delicious!  Nom nom nom! 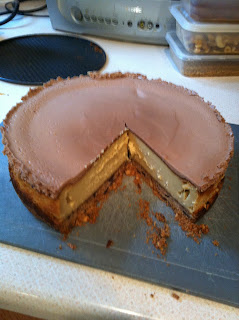 While we're on recipes, below is my good friend Bob's recipe for 'ropa vieja'.  I'm posting it here because if I don't, I'll lose it and I don't want to lose it.  The original recipe came from 'My American Mate' who isn't really my mate (although he is American) - that is/was his 'username' on the Word/Afterword website.  Anyway, this is Bob's version and it looks yummy and I commend it to the house...

"You'll need:
Skirt steak, in the piece, as much as you like.
Red peppers, maybe two or three.
Red chillies, de-seeded, a few.
2 onions
lots of garlic
A couple of tins of plum tomatoes
Cumin
Salt
Black pepper

I like the steak in long, thick slices. Just brown it quite fast in olive oil, then turn the heat down and thrown the onions, cumin, garlic and chillies in to soften and release their flavour, stirring every so often. I tend to give this stage about 20 minutes on a low heat.  Chuck the tomatoes in and bring up to heat. When it's bubbling, turn down to a simmer and cover. Keep it bubbling along gently for about 3 and a half hours. Then chuck in the sliced peppers and leave for another half hour. Season to taste.

Looks ace, doesn't it?  I'll be giving it a go later on this week. 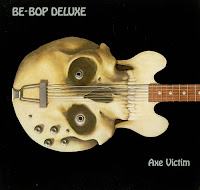 Early Bill Nelson on the soundtrack today - Be Bop Deluxe's debut album, Axe Victim.  It's not their best, and the Glam/Bowie influences are writ large (Jet Silver and the Dolls of Venus, anyone?) but it's not a bad album by any means and some of the guitar playing is sublime.  Bill Nelson went on to many other projects, including the wonderful 'Red Noise' album, Sound on Sound, and a huge number of solo projects that increasingly tended towards the ambient, but in his time fronting Be Bop Deluxe, he produced some of his most commercial and enduring stuff.

Good to see you back blogging, Paul! That looks like a beautiful walk.