I hate dogs, me.  At least I always used to.  Actually, 'hate' is a bit strong really.  But I was put off by memories of childhood pets trashing gardens, barking and pooing.  Always pooing.

So as far as I was concerned, I was a 'cat' person.  Off and on, I've had (or shared) a cat since my early teens.  Since Mrs W and I got together, we've had three cats.  Sadly the last two have both been run over on the busy road outside, and after the last casualty, we both said 'never again'.

But the house soon felt empty without a pet.  And with another cat being out of the question, thoughts slowly turned to getting a dog.  Dogs don't, typically, roam as freely as cats, so it was unlikely a dog would be getting run over outside.  But with us both working, would it be fair to have a dog cooped up alone all day, and would it trash the house in the process?

At the same time, my kid brother got a new dog.  The last one they had, had disgraced itself by biting a chunk out of my sister in law's ear (this was a big tick in the 'No' column, as you can imagine).  However their 'new' dog (which might or might not be a shih tzu - don't quote me on this) is a happy little bundle of fun.  Albeit one that barks a lot.

Our kid's dog came from a 'rescue' centre with contacts to one of our cousins - so at the start of the year we suggested to her that if a nice, placid dog - similar to our kid's - came available, then we might be interested. After a couple of early offers that didn't feel right, we were told about this young Jack Russell  that was 'up for adoption' - a lovely dog, but its current owners had a young child and were nervous about the dog's behaviour around the child - there were stories of snarling and growling, but not actual biting.  Not having (or ever likely to have) a young child, we thought this wouldn't matter to us.

So we went off, one Sunday in January, to meet Archie (for it was he).  We sat, nervously, waiting for him to be brought out to us - and there he was, excitedly jumping up on the end of his lead.  A bit too much of the jumping up, I thought.  But we took him off for a walk, and despite my reservations, Mrs W couldn't bring herself to hand him back - so we took him home. 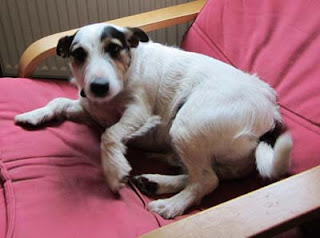 And that's where he's been ever since.  As I type this, he is sat next to me on the chair, dozing but close by.  He likes to be close by.  And he is an absolute joy.

Perhaps I don't hate dogs after all.

Things I have learnt about dogs this year.

Motown on the soundtrack today, which is always a joy.  This is one of a huge number of Motown compilations I own in various forms.  Today's soundtrack is one of an ongoing series of Motown Singles collections available, roughly grouped into annual sets (the first covers 1959-61, with two sets covering 1971).  Today we're listening to 1968, which was a classic year for Motown.  But then so were they all.

I managed to get the bulk of these box sets on the cheap.  In physical form, they have been available as limited edition boxes, nicely bound and presented, at a premium cost.  But they have also been available as downloads, obviously without the attendant add-ons.  I was lucky enough to find a download site that had failed to grasp the fact that these sets generally comprised 6 or 7 individual discs, and for a while priced them all at £7.99.  So I, er, filled my boots.  They did discover their error, but not before I'd managed to exceed my download limits over a busy weekend!

How to pick a single song from 1968?  Marvin's 'Grapevine' would be the obvious choice, but let's go with something a little bit different.  'Alfie', by the strangely named 'Eviets Rednow'.  A second's thought might reveal who the mysterious 'Eviets' is.  As might the header on the YouTube clip...