Not At All Pointless!

So that's that then - my home-holiday draws to a close, and probably with it this daily stream of nonsense.  I've enjoyed doing it though, so - perhaps - I'll carry on at weekends?  Don't hold your breath though...

Up and out this morning with the dog to see the Old Folks.  They like to see the dog.  Nice cuppa and chat with my mam & dad while the dog buried a bone in the garden.  It's not his bone, it actually belongs to my brother's dog.  Who will have a bugger of a job finding it now.  I like to think of them both, in turn, hiding the same bone from each other on alternate visits.  And each wondering why the bone is never where they last buried it when they come back.  Perhaps they will assume the bone has mystical qualities that allows it to transport itself from place to place on its own.  Perhaps this will blow their doggy minds.

We then went off to the forest for a stroll in the crisp autumn sunshine.  Not our usual route, we stopped in the main bit of the forest on our drive back through.  Dropped a bit of a goolie, as the bit of the wood we chose was obviously the 'bikers' section - lots of people riding quickly down hills and jumping over logs and stuff.  I had to keep him on the lead most of the time, lest he got run over by a runaway BMX-er.  He then led me a merry dance, taking me a bit 'off-piste' and into the muddy, boggy areas of the forest.  Bearings well and truly lost, we were lucky to find our way back to the main road just a hundred yards or so away from where I'd parked. 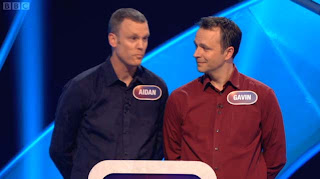 Been entertaining myself today watching my mate Gavin on the telly!  He was on the quiz show 'Pointless' (Episode 33 - catch it on iPlayer) with his mate.  And he only went and won the thing!  Sadly the jackpot is not of 'Millionaire' levels - particularly since the previous jackpot had only just been won in the previous episode, so he won't be retiring just yet.  After a dodgy first round, the boys improved as the game went on, until their deep knowledge of obscure Brit Award winners saw them through.  You'd expect nothing less of an Afterword regular!  He should just about be able to afford a round next time we all meet up...

Another mate of mine who has been doing great things is currently blogging about his trip to the USA, as part of an 'International Visitor Leadership Programme' administered by the US Department of State.  Noordad is a local councillor in the North West and as part of the trip is visiting Detroit, Washington, New York and other places to talk to US politicians about areas of common interest.  Hopefully this trip will inspire him to do even more good things for the people in his neighbourhoods.  His blog is here if you're interested - there's some inspiring stuff there. 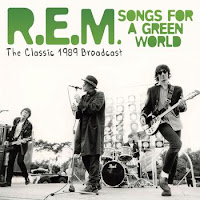 REM on the soundtrack today - an 'official bootleg' of a 1989 show in Orlando, part of the tour promoting the 'Green' album, just as the group were transitioning from 'big' to 'gobsmackingly massive'.  I've a few of these albums, released by a company called 'Leftfield Media'.  The quality is variable (I've a Randy Newman one that sounds like it was recorded from outside the building) but this one is pretty good, both in terms of sound quality and the strength of the material.

I finally got round to seeing REM live on the 'Accelerate' tour and they blew me away.  I expected them to be pretty much going through the motions at this stage in their career but it was one of the most powerful shows I'd seen in years.  God, they must have been great in their prime.