A nice lazy day today, in contrast to yesterday, when I boxed off all my outstanding chores.  So having walked the dog early on, I've been chillin', reading the paper, tinkering on t'internet and generally recharging in advance of the return to work on Monday.

One of the things I've been doing is hanging out on The Afterword site, the site that rose from the ashes of The Word website.  Regulars may recall my longstanding devotion to The Word in its many guises - magazine, podcast and website.  Sadly, falls in circulation and advertising revenue led to the demise of The Word back in July.  Unfortunately there isn't a market, apparently, for a well-written magazine covering all types of media - music, film, television, technology, and the business underpinning these media.  However of greater concern to me - and to many other people - was the associated loss of the website, where a strong, vibrant community of like-minded individuals had developed over a period of five or so years.

Fortunately, within this community are a number of people who had the drive, time and technical wherewithal  to design and launch an alternative to the Word website, and so 'The Afterword' (see what they did there?) came into being.  The intention was to mirror, as closely as possible, the original site, albeit without the ties to the magazine.  Over time, the vast majority of regular contributors have migrated across to The Afterword, and a number of new faces have also started to make a contribution.  Overall the transition has been pretty seamless, albeit with the odd hiccup and bout of navel-gazing.  If anything, the site's a better place than the old one, being run by the contributors rather than by the magazine staff.  Anyway, the link's over there - get yourself over there and registered!

With the England international last night, there's a distinct lack of footy to get worked up about this weekend.  This is not a good thing.  I have completely lost interest in the performance of the national team, to the extent that I can't be bothered watching.  And while it's nice to see a couple of the Everton lads getting the recognition they deserve, I'd rather they weren't playing and exposing themselves to injury (or the fluttery come-ons from the squad members at "bigger" clubs).  There have now been two international breaks since the season started, giving a disjointed feeling to the season and too few games being played, for my taste!  By the end of October there will only have been four league games played at home this season, and only one of those at its rightful time of three on a Saturday.  It's not good enough! 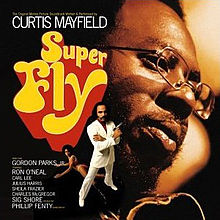 Anyway, I've been listening to the great Curtis Mayfield while writing this, and for the second day running it's a film soundtrack - this time for Superfly, one of a series of 'Blaxploitation' flicks made in the seventies.  I'm pretty sure I've never seen Superfly, but that doesn't matter - it couldn't possibly live up to the soundtrack anyway.

Curtis's voice was one of the sweetest in gospel/soul, and it remains sweet here, despite the subject matter - in fact, the contrast between the sweetness of the voice and the toughness of the lyric works incredibly well.

How serendipitous, Mr Waring! Guess what LP I was listening to yesterday? Yep, Superfly. Like you, I don't think I've ever seen the film. As you say, it's bound to be a disappointment when the soundtrack is as good as this.
I've also, you'll be glad to know, taught my boy to fold his arms like the gun-toting chap on the cover and say: "Superflyyyyyy..." in a cool dude accent. My work here is done.

Excellent work Mrs Drake! Now get him started on the lyric to 'Shaft'!