Baking Doesn't Get Camper Than This...

Day three of this year's 'staycation' (is that right?) is being spent in the company of Mrs W, who is currently working a four day week, with Wednesdays off - an arrangement that splits her working week quite nicely into two, two day chunks.  And gives her Wednesdays to do all the chores that need doing around the house.  Or sit there watching Deal Or No Deal and Come Dine With Me.  Today however, shopping needed to be done so, after walking the dog, we went off to the shops (again) to buy women's clothes and suitcases for the cruise planned for the year end. 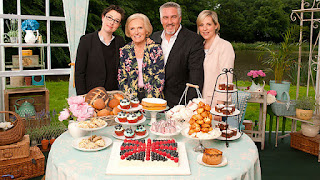 And with today off, it meant that last night we could kick back with a nice bottle and a plate of cheesy pasta - and watch The Great British Bake-Off!

I recall last year a couple of my Twitter friends (Hi Grant!) getting quite giddy about one of the contestants on this programme.  Now last year I was pretty much living on my own, as Mrs W was working in Southampton and although I do enjoy cooking programmes, baking is not really my thing.  So I was far too busy watching 'boy' stuff and was quite happy to let TGBBO slip along beneath my radar.

We've been completely sucked into this year's contest which has been absolutely fantastic television, knocking Masterchef into a cocked hat.  After a succession of rounds which have seen innumerable WI members and vicars' wives bite the dust, we were down to the last five last night.  And with wickul gurly Cathryn sulking her way out of contention, we are left with three blokes and the token lady - and even she has a bloke's name.  Danny (for it is she) could still win this - but the smart money is on one of the lads carrying off the big prize.

My favourite is James.  Not because he's going to win (he isn't) but because he comes across as if he's making the whole thing up as he goes along and, quite frankly, couldn't give a bugger.  Plus his proclivity for chucking a gallon of whisky into everything and anything he's baking makes him a man after my own heart.  And on top of that, he's clearly modelling his look on Criminal Minds' Dr Spencer Reid, which has to be a good thing.

Which leaves the remaining (and only) competitors in the Great British Camp-Off side competition - John and Brendan.  John is delightfully camp, but don't let that softly spoken demeanour fool you - he is one tough cookie.  A couple of weeks ago he cut himself and disguised the fact by putting on a blue rubber glove - which slowly filled up with his own blood until it had doubled in size.  Still John baked on, his bloody glove flopping about like a big clown's hand, in imminent danger of exploding under the pressure and showering contestants, presenters and judges in a Carrie-esque fountain of his vital fluids.  Happily he was led away to surgery by the presenters, living to bake another day.

Brendan combines his campness with an underlying note of posh, but both are completely masked by a steely, ruthless determination to win that would make lesser men (ie me) quail.  He has this wonderful half-smile that extends no further than the right side of his mouth - and certainly never reaches his eyes. You just know that while he is smiling politely at one of the judges' comments or presenters' witticisms, he is secretly wishing upon all of them, along with his fellow contestants, horrible, slow, painful deaths and that he would bake his own grandmother if it meant he could be Star Baker just one more time.

So yes, Brendan to win, and if I was one of the other contestants, I'd be cocking up my petits fours just to make sure he won.

A special mention for the presenters and judges as well.  Sue Perkins and The Other One are good fun, but the real stars of the show are the judges - Mary and Paul.  Mary's name seems to get bandied round in hushed tones by all - I assume she is/was the Heston Blumenthal of the Victoria Sponge back in the day.  She's a lovely lady, but the jeans last night were slightly inadvisable I thought.  Paul Hollywood (that can't be his real name, surely) seems to get Mrs W all a-quiver for some reason.  I like to think it's his gentle scouse lilt and steely good looks that do it - traits he obviously shares with me.  He does like a 'good bake' though.

I will so miss this series when it ends. 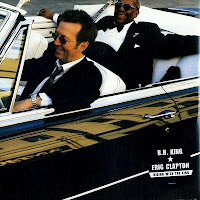 I'm typing this to the incongrous mix of Eric and BB on 2000's 'Riding With The King'.  I can see what Clapton was trying to do with this album - fulfilling a desire to play with one of his heroes and, no doubt, try and regain some blues credibility into the bargain.  It works to a certain extent, but still comes across as too smooth and polished to these ears and whilst the guitar playing is (obviously) technically excellent, it is all a bit emotionless and clinical for me.

Still, I'm sure they both had fun and I'm all for BB's pension fund getting topped up some more.

Here's Eric, Ridin' (and Singin' and Playin') with The King.  It does look like fun, doesn't it?

Good to see you back blogging Mr W. However a little less baking would be in order!!!

In a strange coincidence I put Eric and BB's album on my iPod at the weekend. I haven't played the album since it first came out and on playing it again after 12 years I can't say I disagree with any of comments. Nice enough but just a bit bland.