...Kevin Friend, that is - the referee of the Wigan-Everton game I've just been watching on a snide internet feed.  Although the game finished 2-2, we were on the end of two very dodgy refereeing decisions - Wigan's opening goal was clearly offside, and Nikica Jelavic was denied a clear penalty halfway through the second half.

Now a more disinterested viewer than myself might argue that Everton were lucky not to have Marouane Fellaini sent off for a wayward elbow towards the end of the first half - but overall I would still argue we got the short end of the stick (again) today and were unlucky not to have won in the end. 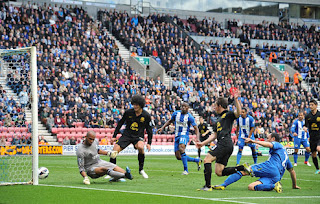 It started poorly though - Wigan were clearly very up for the game, and their 3-4-3 formation didn't really suit the way we were trying to play.  In particular they got a lot of joy down their right side, with Johnny Heitinga having a bit of a 'mare in the first half (as he admitted himself on Twitter later).  In fact we looked all over the place defensively, with Seamus also struggling at right back.  Central midfield was also a bit toothless, and Felli was in a stroppy mood which hindered his ability to contribute bryond giving away daft free kicks.

Notwithstanding the dodgy nature of the opening goal, the boys did well to equalise within a minute, only to fall behind again due to some dodgy defending.  Half time couldn't come soon enough!

At the break, Moyes made the necessary change, bringing Distin on to balance the defence and bring some pace and presence to the left side.  He should have been on from the start, really.  It worked too - Everton were on top for virtually all the second half, but as the chances went begging and the decisions weren't given, it looked like it was going to be "one of doze", as Ronnie Goodlass would say.  Happily, we were awarded a penalty that even our friend Mr Friend couldn't ignore, and we got the draw that was the least we deserved. 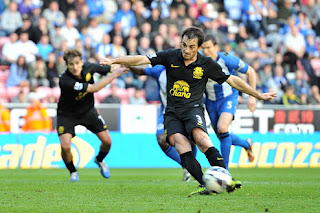 Man of the match?  Difficult, as few players really shined.  Jelavic led the line well, and took his goal very well, and Pienaar was always buzzing and available - but ultimately it has to be Leighton Baines for a busy, productive performance against his old club, topped off with a very calm and well-struck penalty.  By far the best left back in the country - bar none.

So - third in the table, and probably four points less than we should have.  I have no idea how long this run will last, but I'm going to enjoy it while I can!

Quiet day today after a late night last night.  Not deliberately - it was one of those 'headphone' nights after the fillum (The Pact - not a bad little horror movie, bigger on the psychology than the gore), finishing off the last of the wine.  Naturally this led to me falling asleep in the chair, to wake up at two in the morning with slobber rolling down my chin and something dodgy blaring out into my unresponsive eardrums!  Other than walking the dog (twice!) there is very little to report.  Which is as it should be on a Saturday.

Achingly cool (if somewhat dissonant) soundtrack today - Miles in his Bitches Brew period - the full sessions, note, not just yer plain vanilla Bitches Brew.  I have to say I do struggle a bit with this phase of Miles' career - the word 'fusion' tends to bring me out in hives, whether applied to music or to food.  I much prefer Miles' work with Gil Evans - but hey, iTunes plays what it will.  There are many out there that will attest to the importance of this phase of Miles' career, but some actual tunes would have been nice.