So, I duly got myself off to Birmingham yesterday afternoon, to put the world to rights with my old mates.  I gave myself plenty of time to allow for the inevitable delays on the M6, the intricacies of the Birmingham ring road system, and the road closures around the Tory Conference area.  Of course, apart from a few delays right at the end of the journey, everything went fine and I turned up about an hour early.

So I texted the boys to tell them where I'd be, got a beer and people watched.  And tweeted, a touch waspishly.  As you do.  Simon soon turned up, and I (guiltily) stopped tweeting.  Kevin turned up in time for the second round, after which we repaired to a local Chinese for some chuck.

A couple of hours later, with world duly put to rights, creatures of the land, sea and air duly scoffed, and the bill duly paid, we went our separate ways.

My soundtrack to the journey there and back was one of my favourite podcasts, by 'The Rocking Vicar'.  I had a couple lined up to listen to and, as always, they made the journey pass by pleasantly and quickly.

So tell me of this Vicar who Rocks, I hear you say.  What madness is this?


Well, the vicar him(or her)self has yet to make an appearance.  The podcast is in fact presented by two acolytes, Magnus Shaw and Terence Dackombe, who blather on about whatever takes their fancy for an hour or so, add some records to their imaginary iPod, and then take their leave.  Last night, subjects under discussion included The Great British Bake-Off, the rise/fall/rise of MySpace, Celebrity Mr & Mrs,  the charm and grace of Ivan George Morrison and 'all you can eat' meal offers.

The climax of the podcast is the 'pretend iPod', where Magnus and Terence each select, and justify with a few minutes' chat, a particular song for inclusion on their 'pretend iPod', closing the 'cast with a clip from each song.  I believe they stole the idea from the 'soundtrack' conceit popularised by this very blog...

I think you can see why this eclectic mix might appeal to me...

I should profess a (very minor) connection. On a trip to That London just over a year ago, I spent a very pleasant evening in the company of Terence, (along with David Hepworth, Danny Baker and various members of The Massive) watching The Silver Seas in Islington.  A nicer and more amenable chap you could not wish to meet.  Furthermore, a few other friends of mine have contributed occasional pieces to the Vicar's website, the address for which can be found in the 'Stuff I Like' box over to your right.

Be that as it may, you should all shoot off to the website, or your podcast provider of choice (iTunes works for me) and bookmark/subscribe post-haste.  You won't regret it! 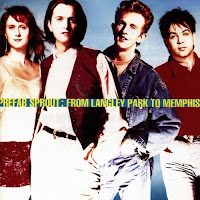 And so to my album of the day.  From Langley Park to Memphis was Prefab Sprout's third album (leaving aside the delayed release of Protest Songs) and it was probably their most commercially-aimed release (and possibly their best-selling?).  Typically, it's possibly my least favourite of their albums - although Prefab Sprout's worst work is still going to be better than most people's best.

That's not to say I don't like the album - I love it dearly - but for me it just doesn't reach the heights of Steve McQueen, Swoon, Jordan or Andromeda Heights.  When it is good, it is very good (Cars & Girls, Nightingales) but the weaker tracks like The Golden Calf and the 'hit', The King of Rock & Roll do let the album down for me.

I'm pretty sure I read somewhere that 'The King of Rock & Roll' was written just so Paddy could prove he could write a song around that title.  Oh, and the video is possibly one of the worst ever recorded.  Ever.  I also recall Cars & Girls being discussed on the Rocking Vicar - the song is a 'tribute' to Bruce Springsteen (cars, and girls, being all Bruce writes about, apparently) - the debate was around the degree of affection (or otherwise) included in the song.  For my part, I think it's written affectionately rather than dismissively - if not about Bruce himself, but about those who follow Bruce's dreams of escape (in a car, with a girl).

Anyway, you decide.  Here's the Sprout live somewhere in Europe (with some quite frankly bonkers dancing on the side) back in the day, performing Cars & Girls.  And just what is Wendy wearing?!