Not this sort of skipping...

(Apologies for the BA Robertson at the beginning there)

But this sort of skipping! 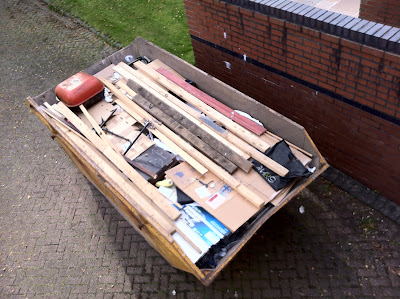 This was one of the chores I gave myself to do in my fortnight off - to clear the garage of all the crap in there, thus creating space to get one - who knows, maybe two - cars actually into the garage.  Over the years, the garage has become the dumping ground for lots of junk - cardboard and polystyrene, mostly - packaging from electrical goods old and new.  Sadly the junk has slowly squeezed out the cars, and created a fertile nesting ground for smaller rodents.  This needed to be sorted, before we had infestation problems and - more importantly - so Mrs W's temperamental motor could actually be garaged during the winter months.  If it's not kept in the (semi) warm, it complains bitterly.  Likewise the car (see what I did there? Ha!) - when it gets cold, the gearbox gums up making changing gear a bit of a lottery.  Which is a bad thing.

So.  The skip had been ordered, and I prepared to wait in until it was delivered.  I didn't have to wait long - at 07:45 there was the distinct sound of an industrial vehicle reversing onto the drive.  I, of course, was still in bed.  I'm on holiday, for God's sake!  Anyway, clothes flung on to open the door for the driver - and fooling no-one - I paid up and looked at the cavernous yellow box blocking up the drive.  "I'll never fill that", I thought.  Ha!

Well I thought I might as well make a start.  I was going to do a 'before' and 'after' picture - but to be honest,  I'm too embarrassed by what the 'before' looked like!  As I said, most of the junk was packaging, but there were a few old, beloved items that ended up in the skip - largely because the mice had got to them, not because they'd never get used again.  Oh no.  The football boots went - not worn in anger since 2000.  The rollerblades - not worn in even longer.  Video recorders.  35mm cameras.  The odd telly.  Oh, and the bike - bought on eBay for twenty quid.  Used once.  Reams and reams of computer cabling and obsolete connectors.  Modems. Mice (rodent as well as computer - I had an old 'humane' mousetrap with entrances but no exits...two mummified corpses confirmed that the thing actually worked...)

Once I got into it (not literally 'into' it - you know what I mean) I found myself actually quite enjoying the job.    Slowly, the skip filled and the garage emptied.  Halfway through, I did have a bit of a crisis of confidence - the skip was filling quicker than the garage was emptying, but when the heavier stuff started getting thrown in, it pushed all the cardboard and polystyrene down, making a bit more room.   Even so, as the picture above demonstrates, there was barely enough room for everything.

Suddenly, the job was done - everything that had to go in the skip was in the skip.  All that was left was to sweep the detritus off the garage floor (with a bit of a shudder when clearing some of the darker nooks and crannies) and then to rearrange all the stuff that was staying, nicely and neatly against the side walls.

I'd given myself three days to get all this done, so to box it off in a matter of hours was even more pleasing.  Go me!

Pet Shop Boys on the soundtrack today.  Multicultural aesthetes and bon viveurs they may be, but how many skips do you suppose Neil and Chris have filled in their time, eh? Eh? 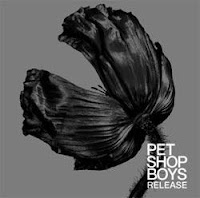 Of all their albums (and I do have all their albums - I love the band) Release is probably the one I play least (and was probably one of their least successful overall).  It does feature Johnny Marr on most tracks though, which can only be a good thing.  Less overtly 'dancey' than most of their stuff, with the odd acoustic instrument in the mix, perhaps it was a bit too far away from 'usual' PSB territory for many.

This is 'Home & Dry' the lead-off single from the album.  The video, which may have helped the single sink without trace, features mice in the London Underground.  Which, given what I have been dealing with today, is curiously appropriate.

Niall, you're the second person to say that to me - it wasn't intentional, just lots of flatpack cardboard and stuff, flattened further by the wood on top!