Day 202: Who Watches The Watchmen?

Me! I watched The Watchmen! 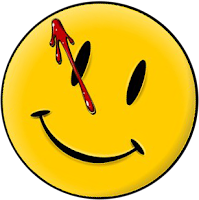 Finally - I bought the DVD some time ago, then put it to one side until I'd read the book. Then never got round to watching - until this afternoon, when a verrry slooow Friday afternoon needed something to fill it. I needed to find time to watch it by myself, because it is not a Mrs W type of film in any event, and especially with her being unfamiliar with the book.
And I really enjoyed it. Not entirely sure why they had to modify the ending in the way they did - you wouldn't have thought the CGI budget would have been a problem - but it still worked well enough. Inevitably huge chunks of the book were omitted, but nothing that had a significant impact on the main plotline of the book. In fact, I was impressed just how closely the film followed the book - right down to large swathes of dialogue - which makes it even stranger that they felt the need to play around with the ending in the way they did.
I do think familiarity with the book was important to be fully aware of what was going on - particularly the backstory about The Minutemen - and I think some of the plot leaps might have been a touch confusing for someone who didn't know the book.
So - the best film treatment of a comic book? Probably. Looking forward to the inevitable 'Director's Cut/Ultimate Version' though.
Today was a bit meh, all told. No news on the job front, which is a bit frustrating as I need to know what's what in the context of the contract work opportunity down in London. Emails over the weekend to chase up, I think.
I was also supposed to be seeing Richard Hawley in Manchester tonight, but that didn't happen either, as my ticket never arrived, despite Ticketmaster insisting it had been delivered. Probably a victim of the recent postal strike. In the end, I wasn't overly disappointed - I'm sure the chance to see Mr Hawley will come again (he said hopefully - I've got previous form in missing bands forever when I had the chance to see them, haven't I, son?) and it would appear the due to the Tory Conference being on in Manchester, parking around the Hall would have been a nightmare anyway.
So I stayed in with Mrs W and caught up on Masterchef. Pile of rubbish, the two groups of chefs we saw - I'd have done better than any of them - obviously!
In other news, I took a trip out to Blockbuster to get some rubbish films (and some good ones too) to watch over the weekend. They were doing a 'five films, four nights, a tenner' deal, so I stocked up, planning to rip a couple of them to the computer for 'personal evaluation'.

I'd downloaded some ripping software a while ago, and it seemed to work well with the first disc - 'The Damned United' - that is, until I tried to move it across into iTunes. Outside of iTunes, the film was just about an hour and a half long. When I copied it across - which it did, quite happily - the film suddenly doubled in length to over three hours. It seemed to have copied over twice in the same file so there were two 'showings' of the film one after the other - strangely, one with sound, one without. A quick trawl of the internet proved this was not an uncommon problem - but it was also a problem without an obvious solution! So I ended up getting the film across in two stages - ripping into .avi format in the first case, then converting the .avi file into an .mp4 file using a different piece of software.
That worked well, if a little inelegantly.
So - REM on the soundtrack today, a first, I think. Reckoning is their second album, when they were still very much a semi-obscure 'college band' beginning to make a few ruffles in the 'real' world. They had been critic's darlings from the release of 'Murmer', their debut album, but the heaps of critical acclaim they had was still to be turned into mega sales of their albums.
Of course they became absolutely massive, although recent years have seem them fall away both in terms of critical and public acclaim. I went to see them last year at Old Trafford, not expecting much to be honest, but the really blew me away - a fantastic live band still.
Here they are, still young and spotty, when Michael Stipe still had hair (and a minor drug habit, looking at the state of him) performing '...Rockville' in someone's bedroom.
Posted by Paul Waring at 9:51 am