With the impending resumption of the working week - suddenly the pressure's on to finish all the half-arsed (and half-completed) jobs that are kicking around - including the bathroom tiling, which those of you with long memories will recall I started way back on Day 179.  Over a month later, I finally got round to putting back the tiles I'd taken off - hopefully sag-free - along with the mirror tiles to replace those I smashed in the removal process.

Two key problems to deal with (well, three, if you include my general cack-handedness when it comes to Bob The Builder stuff like this).

Firstly, the reason the tiling was needed at all was to rectify a few rows of tile that had been forced into a space that was too small to accommodate them - hence the bowing of the tiles on the wall.  So if the tiles were actually to fit the same gap this time, I either had to trim the tiles or - hopefully - compromise on spacing to squeeze the buggers in.

Secondly, the mirror tiles were not made to the same dimensions as the tiles they were replacing, necessitating a gap around them that had to be filled somehow.  I am hoping the gap is groutable, as it is really too narrow to successfully cut tiles down to size.  The gap also means I need about four tiles to defy gravity during the setting period, lest they slide down the wall into the gap above the mirrors.

So today, it was all about sticking the tiles to the wall and getting them to stay there, keeping flat to the wall rather than bowing.  And - I think - I just about achieved that.  Tomorrow is about grouting and cleaning, when the job - should - be a good 'un. 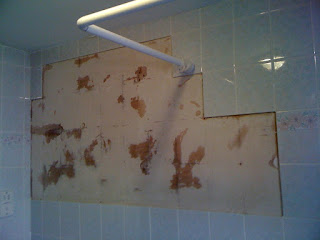 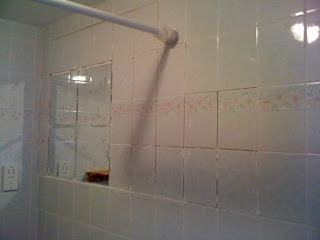 Before and during pictures up there - there will - eventually - be an 'after' picture as well!

Quiet on the job front today following the frenetic bursts of activity earlier in the week - just formal confirmation from the insurance company of the terms around temporary work - essentially I can do 90 day's worth without my claim being affected.  Just need to sort the Job Centre out now, and I think we are good to go!

The rest of the day was spent making sure I had sufficient kit together for my Staines trip, and doing a bit of prep around the issues involved.  After a bit of consultation with former colleagues, that angle was satisfactorily covered, and I also seem to have commitment to a lunch from the good man who provided the introduction in the first place!  Coupled with plans for dinner with Simon when I'm down in Staines, and my social life won't completely grind to a halt while I'm out of the North!

Double Bubble on the Masterchef front, with the final semi-final and the 'eliminator' for the final.  Puzzlingly, the preview on the internet suggested there would be five contestants in the eliminator - how would that work, after four semi-finals?  All became clear, when the two final semifinalists could not be separated by the judges - so they put them both through!

And they were good, Steve and Daniel.  So good, that both made it through to the final, along with Simpering Sally (Marianne, actually).  So it was goodbye to hot favourite Ryan, and to Matt, who'd seen off other hot favourite Ludovic.

Smart money must be on Steve - but I wouldn't write off Marianne just yet...

Motown produced some of the greatest music in the '60s, and 1965 was probably when the best of the best was released, pretty well everyone being on the top of their game.  The 'Complete Singles' series is exactly what it says on the tin - a series of box sets, containing every single 'A' side and 'B' side released in a particular calendar year.  Amongst others, 1965 gave us:

Ask The Lonely
Nowhere To Run
Stop! In the Name of Love
Tracks of my Tears
Shotgun
Uptight (Everything's Alright)

It also gave us  'Do The Boomerang' and 'Twinkle, Twinkle, Little Me' - but overall, the level of quality control is exemplary.

Here's Martha and the Vandellas from 1965 with Nowhere to Run - Forget the Supremes, these girls were the best Motown girl group by a distance!