Today's soundtrack:  Bruce Springsteen - We Shall Overcome: The Seeger Sessions

Out and about today - I needed to go and visit the aged parents, to pick up a birthday card for Son No 2, who turns twenty tomorrow (Twenty!  Where did all that time go?).  Oh, and to swap soup - I took some of my ham and lentil down for them, only to be given some of her broccoli soup in exchange...which Mrs W immediately earmarked for her lunch at work tomorrow!

Mum and Dad are in the middle of celebrating some remarkable milestones amongst their friends and relatives at the moment - they were at an 80th birthday party over the weekend (at which my dad, like a naughty schoolboy at a wedding, gorged himself on all the food on offer and ended up awake all night with chronic indigestion) - and, more impressively, they are going to a 70th wedding anniversary in a couple of weeks.  Married seventy years!  It doesn't bear thinking about, does it?  My Aunty Edna and Uncle Teddy - must both be in their nineties by now, unless Edna was a child bride.  Married before the outbreak of the Second World War, and still both sharp as a new pin.  God bless them.

Suitably humbled, I headed off to the shops to get my own birthday card for The Boy and to get some stuff in for tonight.  Steak, chips, mushrooms and onion rings tonight, watching The Shield and Professional Masterchef - which appears to have more rounds than an old school bare knuckle fight.  Which is a good thing, in my opinion.

Otherwise, it was a quiet day all told - no more news on the job front, although none was really expected today.  Still waiting for a date for my London trip, and the competition for the Northern job was being interviewed late this afternoon, apparently.  Might hear something tomorrow, although Friday might be more likely, I guess.  Was it so bad of me to be beaming bad thoughts up the M6 this afternoon?  On Mrs W's advice, I stopped beaming bad thoughts, and switched to 'positive' thoughts about myself instead.  Let's hope it does the trick! 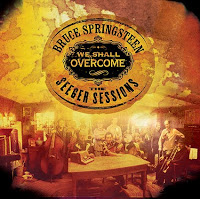 Listening to The Boss as I type - The Boss, Jim, but not as we know him!  The Seeger Sessions see Bruce leaving the E Street Band at home, and performing a batch of 'Trad. Arr.' tunes (and a couple of originals) associated with or written by Pete Seeger, the aged folkie.  So no saxophones (Matt) but plenty of accordions and banjos instead.

'American Land' is the one track from the album that seems to have found its way into Bruce's regular setlist - currently as his final encore - and it's easy to see why.  It's a great tune, performed with Pogueish punkiness by Bruce and his cohorts and a great way to end a night out with The Boss.  See that crowd bounce!