Brilliant! My Richard Hawley ticket arrived this morning!
Twenty four hours late. How rubbish is that? Still, as I said yesterday, I ended up being 'not that mithered' due to the sheer hassle of getting into the city around the Tory Conference. Coupled, of course, with the lure of a Friday night curry with the missus.
Saturday turned into a very lazy day all told. Up early to let Pedro hunt and to bake some bread, then a quiet morning with Mrs W out at her Pilates class. Missed the Grand Prix qualifying due to them all being in Japan and sorting it all out at six in the morning (Vettel on pole, the Brawns nowhere - is there still a twist to come this season?) and no footy until tomorrow - so what to do?
Cook up a storm in the kitchen - that's what! Mrs W came back from the gym ravenous, so it was on with the Formby, out with the frying pan, to deliver up a mountain of sausage, bacon and egg - all to be served up on the freshest of squidgy white bread, sliced with an electric knife as anything else would have caused the loaf to disintegrate.
Eaten in front of Masterchef Professional - now...fine dining or sausage and bacon butty? No contest! In the televised contest, the French Lad and the Scottish Lad went through quite easily, the Little Girl and Other Bloke falling by the wayside. I like the French Lad - bizarrely called 'Ludovic' - he's very laid back and has this strange accent that is a hybrid of French and Welsh. He can cook though, with one of the critics getting quite excited about him - although it might not have been his cooking that was exciting him, if you take my meaning...
Frittered away the afternoon with one eye on the football - Portsmouth won! Wow! - but with little interest, the Big Match being us up against Stoke tomorrow, of course. Then it was back into the kitchen to whip up a stonking lasagne...sorry Matt, it would never have kept through to Thursday and anyway, you've still got my single portion lasagne dish! 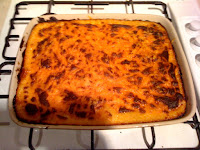 Very pleased with today's lasagne, I must say - the quality of the mince from our local butcher plays a big part in the success of the dish, but the addition of some fresh basil also helped, I think. I also got the consistency of the cheese sauce spot on - that can sometimes be a bit of a disaster, but not today. I'd give you all a taste if I could - but I can't, so you'll just have to look at it instead...
Mrs W. had 'Strictly' on while I was cooking. They seem to have interpreted the term 'celebrity' rather loosely this year - in the vast majority of cases, I couldn't have told you who was the celebrity and who was the professional. Even when they were dancing. The dancing partners seem, if anything, even more 'tactile' this year than they have in previous years - some lovely shots of wives in the audience with false grins frozen on their faces as their husbands and boyfriends are getting seriously touched up by some young totty wearing a few sequins and little else.
I predict a rash of divorces in Celebrityville following this series. Oh, and get Brucie lined up for the 2010 Dead Pool - it can't be long now...the brain has clearly gone, the body surely won't be far behind...
The Cure for your (and my) listening pleasure today. Quite early Cure too - Faith was their third album, when Robert Smith was still pretty miserable, experimenting with eyeshadow but well before the lipstick smear and the bird's nest 'do.
And all the better for it, I think.
Here's 'All Cats Are Grey' from Faith, with a quite evocative 'video' put together by someone on YouTube. Very nice too.
Posted by Paul Waring at 9:35 am