Today's soundtrack: Led Zeppelin - In Through The Out Door

Well you all know what I've done - I've spent most of my time writing about it here!

Today's anniversary passed quite quietly I have to say - a bit of baking, a bit of chiselling, a bit of blogging and that's just about your lot, I'm afraid.

But the baking - oh my. Looking for something tasty to go with my soup, I chanced across a recipe for some 'tear and share' bread rolls. Bread rolls with a 'twist' - quite literally.

Start off by preparing some white bread dough in your breadmaker of choice. Don't do it yourself - far too much like hard work. When your dough is done, roll it out into a rectangle, about twice as long as it is wide. Spread a thin coating of mustard over the dough, then sprinkle grated cheese and chopped ham over the surface of the dough.

Roll up the dough from the short end, in a Swiss Roll stylee. Slice into chunks about an inch and a half thick, then turn onto their edges on a baking tray. 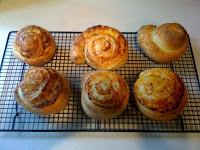 More grated cheese on top, then leave to rise for half an hour, then bake for about fifteen minutes. When they come out they look like this -->

Now you might think this cooking malarkey is something a red-blooded male like myself should refrain from dabbling in in case people, you know, talk. But let me tell you chaps - it makes you a real hit with the laydeez! Mrs W took some of yesterday's soup to work with her today and gave a taste to one of the young ladies she works with. "What do you think?" she said. "I think I want to marry your husband" was the reply.

She's taken some of the bread rolls in today for another taste test. She ought to be careful - she's playing with fire here!

The boy's still got it - if only in the kitchen!

Anyway, I did do some proper man work today, getting on with the cleaning-up of the old bathroom tiles. Just about there now - leaving me no excuse for not actually getting on with re-tiling the thing! Oh, and I did, finally, manage to gouge myself with the chisel. It was just a matter of time. Luckily, it was just a flesh wound.

Led Zep on the soundtrack today, and of all the albums/bootlegs iTunes could have thrown up, it gave us the runt of the litter. Actually, I don't think ITTOD is as bad as it's often painted to be - In The Evening and All My Love are as good a much of Zep's work and, while the album is nowhere near the standard of Physical Graffiti or 1-4, I wouldn't say Presence of Houses of the Holy are that much better.

And anyway, average Zeppelin is still 90% better than most stuff out there.