Welcome to the Working Week!

Look, no daily count in the title today!  Now I'm working again, there's nothing to count from!  I might have to resurrect the count in due course, but for now, we're back to zero.

Yes - the working week.  God, it's hard, isn't it?  Although it did get easier as the week went on, I have to admit it's been a bit of a shock to the system.

But there is an element of riding a bike to it - there's nothing in the actual work itself that I'm thinking - how do you do this, I can't remember.  It's still all there, and the synapses are all flashing like buggery.  Assuming that's what synapses do.

I gave myself an early start on Tuesday, out of the house around half five, to try and avoid all the likely traffic build-up points before any traffic actually got there.  And that worked fine, getting me down to Staines before nine.  A bit too early for the company, actually.  Eventually though, I was through reception, and meeting up with all my new (temporary) colleagues.  The company currently employs a lot of temps, so getting me set up was a breeze - passes for the doors, computer logins, email addresses - all pretty much ready and waiting for me when I got there.

So I've spent the week talking to people, shadowing them while they work, understanding and documenting processes - and already coming to one or two conclusions where things might be improved.  There's a long way to go though - plenty of areas to cover!

Staines itself is - to my surprise - quite a pleasant little town.  David Byrne once described Memphis as "...home of Elvis, and the ancient Greeks".  If he had been writing about Staines, he might have said, "...home of Hard-Fi, and of Ali G".  Which would suggest that Staines was a warren of concrete underpasses, security cameras, populated by blinged-up wannabe gangstas with their kecks clinging precariously to their upper thighs.

Well not in the bits I've seen.  The Thames flows through the town, swans and rowers skim the surface, there's a market day on Wednesday and there's a Waitrose quite handy.  My hotel is a quaint old building just on the other side of the river to the offices, a short walk away.  Not the best hotel I've ever stayed in, but clean, comfortable and handy.  I've had no problem sleeping, anyway.  Here's the view from the office window - check those mean streets! 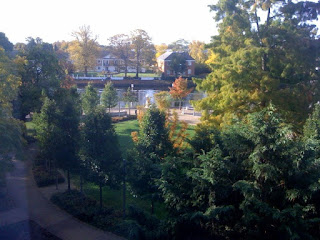 One thing I can never get used to is the 'stuck in the hotel, alone' syndrome.  Went out for a meal with the FD one evening, but for the other two nights I was left to my own devices.  Rather than sit alone in a restaurant, I chose to get some chuck in from the supermarket and squirrel myself away in my room.  Plenty of entertainment though - I took the 'Red Riding' trilogy of DVDs down with me to watch on my laptop - one film per night.

I blogged a while ago about reading the books - and I'm glad I read the books before watching the films.  The screenwriter and the various directors have done a really good job of extracting the meat of the story from the  books, without compromising too much in any particular area.  In fact, the films clarified a few areas in the books that I'd struggled with (I think - there's some conflation of characters that might have misled me a little bit) and - possibly the biggest compliment I can pay to the films - they've made me want to go back and re-read the books, in the expectation I will get even more out of them second time around.

So home for the weekend, and also Monday next week - when I have my second interview for the permanent job in Preston I've mentioned before.  Down to the last two - one final push, and I might be sorted before Christmas.  God, I hope so. 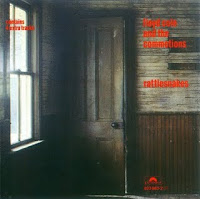 And all this to the jangly, literate sound of Lloyd Cole and the Commotions.  An ideal soundtrack, actually, to the past week's bedsit life.  Back in the '80s, Lloyd soundtracked the existence of many sensitive singletons in his black rollneck sweater and Gitane-cracked voice, singing about simple metaphors, Eve-Marie Saint, girls with  "...cheekbones like geometry, eyes like sin, ...sexually enlightened by Cosmopolitan.." and driving round in daddy's 'deux chevaux'.  Obviously I wasn't sensitive, or a singleton (for long, anyway) at the time, but Lloyd still soundtracked part of my life, and Rattlesnakes is still one of my favourite albums.

This is great - Perfect Skin, source of the great line quoted above.