Up and out ridiculously early today, heading down the motorways to Staines for a planning meeting around the contract work that - might - be taking place shortly.  It's a long drive to Staines (just south of Heathrow, just off the M25) but it's the 'right' side of London if you're driving from the North West, and the public transport option would involve cars, trains, tubes and taxis - and around as much journey time as the drive. 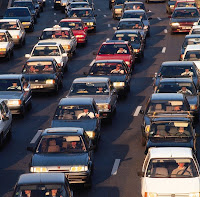 Or at least it would have done if it wasn't for the big crash on the M40 around Northampton.  I'd been making good time up to that point, skirted Birmingham (taking the easy option of the toll road) and was all set for a 9:30 arrival in Staines.  Then everything ground to a halt.  A three-lane halt at that.  Traffic was stationary for a good hour, after which we started to roll forward, steadily, but at around 5mph, for a couple of miles.  Got to the obstruction just as it was cleared to the hard shoulder with all lanes open - the motorway had been closed completely, then expanded to just one lane, up till then.  At this stage the 'big' crash didn't look too nasty - a taxi hitting a Jag, from the looks of it - and there didn't seem to be any ambulances involved, happily.  There was a big pile of suitcases on the bank next to the motorway which suggested that someone's holiday (taxi on its way to Heathrow?) had been spoiled - but it could have been far worse.

Rest of the journey passed without incident, and I ended up getting to Staines just on eleven.  Enough time for an hour's chat with the FD about the assignment - and for me to confirm my interest - subject to progress on the permanent role that's still lurking in the background.  We've agreed a way forward, agreed charge-out rates and expenses - and will make a final decision on Friday about whether to proceed or not.  The company is still talking to other people about the role, but I do get the impression I'm the preferred candidate again.

Journey back passed without incident, and I was home for half three - just enough time to churn out yesterday's blog and to prepare for the evening's entertainment.

Looks like being a Masterchef week this week, as the semi finals get underway.  Two chefs head to head each night, working in Michelin starred kitchens and cooking their own stuff in the studio.  For a while it looked like the Scottish lad was going through, but in the end 'Simpering Sally' (as we fondly call her) made it through to the final.  Bring on the next one!

A touch of Brazilian on the soundtrack today.  CSS - or Cansei de Ser Sexy (I got tired of being sexy) with their eponymous debut album.  Good fun, in an upbeat poppy electro sort of way, I missed them at Glastonbury a couple of years ago but they went down a storm apparently.  Not, admittedly, a band I would have gone out of my way to see, but in the overall scheme of things, the world is a better place for bands such as this.

Here they are at Glasto in 2007 - yes, it had been raining.  Dig the jumpsuit though!