A bit of a flat day today, if I'm honest.  I finished yesterday absolutely bushed, and I'm not sure why.  Spent most of the afternoon sat in a car on the Huddersfield run, but that shouldn't really wear me out.  I did eat too much tea - chippy tea on the way home which, if I'm honest, was piled up on the plate a bit and did sort of over-calorify the back end of the day...if I said fish and chips, the latter covered in spicy chippy curry sauce, with a big fat scallop on the side, you'd have to agree it was a bit over the top.  No marks from Gregg or Chef Michel for presentation, certainly - and they might have blanched at the seasoning, as well.

But when it's what you want - it's better than any fine dining experience - ever.

So to bed with what felt like a lump of concrete slowly setting in my belly, giving me one of the less sleepful nights I've had.  Not helped, of course, by the furry alarm clock, who has decided that 6:15am is the optimum 'killing time' and yowls until he is released into the early morning mist.  My job to let him out - only fair, since Mrs W is the one going out and earning a crust just now, I guess.

Progress on the job front is pushing forward quite nicely in two directions at the moment - today we moved the London contract on a bit further...Monday I'm going down to Staines to meet the finance team and to do some serious scoping of the project.  This looks like a goer, irrespective of what happens on the Preston front.  Just need to make sure that timings don't upset the big prize, which is, of course, the permanent job!

Trains to Staines are a pain, though (you see what I did there?  I don't just throw these words down, you know) - so I think I'll drive down on Monday - early start to avoid the Birmingham rush, and I'll be fine.  It'll be nice to get a suit on and to get back to the day job, if only for a while.  Like riding a bike - hopefully! - it's been a while since I've done any serious job speccing, but once you've got it...

Speaking of Birmingham reminds me - Kevin got in touch this morning to share his 'Eureka' moment with me. He thinks I should write seriously - fiction, or some sort of autobiography based upon this here blog (but with less cooking).  To be honest, I'd love to - if I had the inspiration, the subject to write about.  I know that this stuff keeps me entertained - and about 25 of you out there - but would people really pay for a book based on all this stuff?  I have my doubts.

Anyway, how do you embed a YouTube clip into a book?

We'll see - I'm sorely tempted.  Perhaps I'll just print the lot off and send individual volumes out to you all.

Actually, scratch that, print it out yourselves.

I'm typing this on a quiet Saturday morning, with a full pot of coffee on the side, Mrs W. out at Pilates and Pedro bown the banks - and Marvin 'getting it on' in the background.  Not literally, obviously.  His 'getting it on' days were sadly cut short by his old dad a good few years ago now. 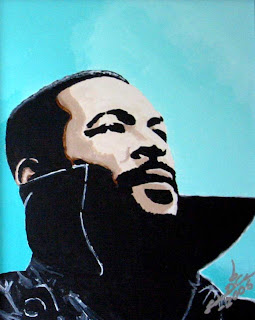 But - late night or early morning, when the mood is right - is there anyone else who can caress your eardrums as well as Marvin?  Effortless singing, a huge range of upbeat and downbeat material, classic duets with Tammi, Diana and Kim.  Songs to move you and groove you.

Is there a song out there as lusty as 'Let's Get It On'?  Only one - Sexual Healing - and that's one of Marvin's as well.  Social comment?  What's Goin' On is the template.

Marvin - along with Smokey and Stevie - took the Motown template and raised it way beyond boy band/girl band stuff, helping create a whole new sound (the Sound of Young America!) that complemented the deeper soul coming out of Memphis at the same time -and soundtracked the Sixties into the bargain.

Music that is sprinkled with genius.