That was today's job, folks, and very, very dull it was too.

Captain Paranoia had struck and I decided to do a full, permanent backup of my iTunes library.  In the past, I've backed up from one external hard drive (where my 'original' music and stuff is held) onto another external hard drive - but the backup drive is now too small to hold all my music and films, as well as my photos and other documents - so whilst the plan is to get another, bigger, hard drive for music backups, I thought I'd also copy to DVDs so I have a permanent and largely unbreakable backup.  So that's what I did.

Unfortunately I have got a BIG iTunes library and, whilst the process is all automated from within iTunes, you still need to feed it with blank DVDs on request.  Which I did - 71 DVDs, at approximately six minute intervals.  As the Yanks say, do the math.

And yes, 71 DVDs is a lot of gigs.  As in gigabytes, not concerts, although there's plenty of them as well!

Whilst all this was going on, I was pushing for some answers on the job front - and largely getting them, I have to say.

Firstly I took a call re the permanent role in Preston - still the preferred candidate, but one more person for them to consider in this round.  But all being well, I'll be called for second (final?) interview next week.  But either way, the timings of the permanent role will not have an impact on the contract work in Staines.

So - secondly - let's ensure the Staines work would not cock up the mortgage insurance.  No response to yesterday's email, so on to the insurers by phone (following a bit of nagging from Mrs W!)  And, again, good news!  Obviously they won't pay me while I'm working, but when I stop, the benefit kicks in again seamlessly and - even better - the payment period is extended to add back the period spent working and not claiming!  Result!

Finally, in touch with Staines to confirm that its all systems go for next week - starting work on Tuesday!  There might be some tweaking of Terms of Reference, but the meat of the review - and the cost/expense structure - is all agreed.

So - finally - I'll be working for The Man again and, for a period at least, not living the high life on your taxes. To the tune of sixty-odd quid a week.  Bring it on!

But Paul!  What does this mean for the blog?  I don't hear you wail.  I'm not sure actually.  I doubt I'll be able to update stuff on a daily basis, but I'm not about to stop.  Mind you, stuck in a hotel in Staines - with wireless access to the internet - it might be one way of staving off the 'sad lonely man in hotel' syndrome.  We'll see - no promises.  Enjoy it while you can! 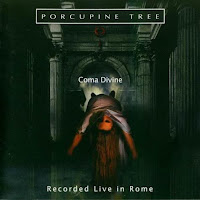 Porcupine Tree?  What sort of name is that for a group, Paul?  Well it's a mighty silly name, if you ask me.  But - perhaps surprisingly - a remarkably good group.  'They' are essentially one man - Stephen Wilson - playing progressive rock (no shit Sherlock) blended with some 'heavier' material.  Heavy on the guitars and the synths, with some flowery lyrical flourishes, they are well worth a listen - if you like that sort of thing.  And I do.

Coma Divine is a live album from 1997 and captures the band on good form.  Long, instrumental passages interspersed with shorter, even poppier, pieces.  Probably one for the committed fan rather than the casual listener but never boring.

Here they are - Arriving Somewhere But Not Here!