As Marc Almond once stuttered, albeit in very different circumstances, I would imagine.

It's frustrating enough being out of work and waiting for the phone to ring, or the emails to arrive, when things are quiet - but it's doubly frustrating when you are actually waiting for something tangible - in this case, some feedback and updates from an interview that took place over a week ago.  It's triply frustrating when the lack of that feedback is holding up another opportunity you are chasing!

So I spent the morning trying to get some arses into gear - and getting nowhere, quite frankly.  At least I've done all that I can do to push things on.

Taking a step backwards for a minute, I know - from being on the other side of the table - just how long these processes can take, and where they sit on the priority list when things are manic - but knowing that doesn't actually ease the frustration that much!

In better news, I took a couple of calls from one of my more reliable consultants, about another contract opportunity in Liverpool that might give me 3-6 months' work.  Just waiting to get some more details on that one - perhaps this is the one that will eventually come good?

Still, pointless fretting about it - you have to manage your impatience and continue to show a brave face.

So - how to fill the time?  Well, if in doubt - bake!  Two loaves today - a slightly off-the wall Spelt loaf for me, made interesting by the addition of milk powder, lemon juice and zest and poppy seeds, and a more mainstream rustic French loaf for Mrs W's sandwiches.

Oh, and I finished cleaning off the old bathroom tiles at last - after days and days of hacking away with a chisel at the old cement, my dad gently broke it to me that the cement would be water soluble - and so would wash off easily.  And it did.  How foolish do I feel now?

Unfortunately no excuses left for not retiling the bathroom now...

Having sorted out the Glastonbury ticket sales, the fun now starts trying to guess who the headliners are going to be for this 'special' 40th anniversary festival.  Current speculation has the Stones, David Bowie and Coldplay as favourites, closely followed by Bob Dylan and the Foo Fighters.  My money is on Radiohead - but as Son No 2 pointed out, my money is on Radiohead every year.  Got to be right eventually though...

I suspect Coldplay will be there though - in which case I shall be elsewhere.

Filled the rest of this loooong day by managing my football team a touch further.  As my young team of promising starlets have aged, matured and gelled, and buoyed by their success last season in the Europa League, they are now a fixture in the upper reaches of the Premier League despite a hideous lack of sensible funding from the Board.  Currently top of the league (in Christmas 2013) although an upcoming away match against a frankly unbeatable Man City might soon drop us from those heady heights.

The Boy went to see Little Man Tate in Sheffield  the other night - one of their final gigs before sadly splitting up.  His review is here, and you will note he is pretty disparaging about the support band, Artery.  A shame they were poor - back in the day - when I was his age, actually - they were one of the leading bands on the Sheffield alternative circuit, along with Cabaret Voltaire, early Human League, Clock DVA etc.  Looks like they've recently re-formed and are doing the rounds again - although I would suggest a gig supporting LMT is not the right sort of slot for them.  Now if only the Cabs would re-form and get out there...

This is what Artery were like back in  the day - somewhere in Sheffield, 1978.  I might even be in the crowd, somewhere...


In contrast, today's soundtrack features electronic noiseniks Leftfield, who are actually not all that leftfield, when you listen to them. 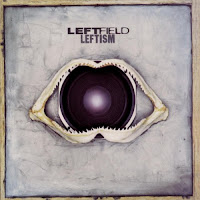 Leftism is their first album, and doesn't include Phat Planet, used in the excellent soundtrack to the Guinness advert with the surfers and the horses, but is still a pretty good collection of beats and techno, with a nice dubby companion disc attached for good measure.  Oh, and a good selection of guest vocalists, including John Lydon, who brings something a bit special to 'Open Up'...