Out early this morning, to pick up a few bits and pieces to see us through the weekend.  Picked up The Times too - it's not often these days I bother with a newspaper, but I fancied a long, leisurely trawl through the paper today for some reason.  Oh, and there was a code to download a raft of live REM tracks as well - which probably made the difference between picking up The Times or The Guardian today.

Then back home, to an empty house, Mrs W. Pilating at the gym.  So a quick blog, then a comfortable few hours with the newspaper, with one eye on Soccer AM on the TV.  Multitasking again, you see.

Lunch was a delightful BLT on freshly baked bread - one advantage of The Hunter's early morning runs dragging me out of bed is the ability to get a loaf on good and early, so that it is baked and rested in time for lunch.  Watched the last Masterchef quarter final in between mouthfuls of BLT.  A couple of very competent chefs going through this round, especially young Ryan, a very serious young man with an air of quiet confidence about him.  Semi finals next week - who needs Strictly X Factor when you've got excitement like this?  Well, Mrs W. for one, I suppose.

Then in the afternoon I watched the England game on the computer.  This is the match that no-one wanted to televise, so it ended up being broadcast on a 'pay per view' basis over the internet.  Now it may have been 'pay per view' in theory, but of course in practice there were any number of, er, 'unofficial' streams out there, were you of a mind to explore.

Which I did.  However I actually ended up watching on an official stream, albeit free of charge.  Bet365 were streaming the match on their site, free to anyone with funds in their account.  So I deposited ten quid, watched the match, withdrew ten quid, everyone happy. 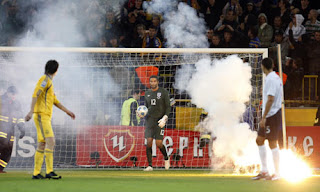 Except Robert Green though, I should think.  Let down by Stevie G not letting a ball go out for a throw, and by Rio failing to judge a hopeful long ball, his bid to keep the green jersey lasted about fifteen minutes before bringing down the Ukranian forward and earning an early bath.

Perhaps he just wanted to avoid being pelted with flares.

Penalty missed, England were coping with the pressure up to a point - that point being Cashley's inability to defend compounded by an attempted header away that merely succeeded in diverting a shot that David James probably had covered into the corner of the net.  After the goal, a combination of fine goalkeeping and decent organisation kept the scoreline at 1-0 to the end, without ever really looking like England would get back into the game.

Good job it all counts for nothing, qualification being achieved before kick off.

Tonight's tea was a fairly decent prawn stirfry - spring onions fried off with some fresh ginger and chilli, fresh prawns added to the mix until they were properly coloured, then a combination of red pepper, pak choi, button mushrooms and baby corn added to the mix and cooked through.  The whole thing then dressed with some nam pla, soy sauce, lime juice and zest and finished off with a sprinkling of fresh coriander and served on a bed of noodles.  Lovely!

I'd love to tell you all about today's band on the soundtrack, but to be honest, I know nowt about them.  The eight tracks I have on iTunes were downloaded from the band's website, but I can't recall what directed me to their website in the first place.  Must have been on someone's recommendation, but I can't remember who or when.

What I can tell you is that they are hard rocking in a no-nonsense way, they are Scottish, they have no Wikipedia entry and they are the third of three bands called The Rites listed on last.fm.  They do have a MySpace page, which hasn't been updated for months, and it looks like they split up a while ago but are playing some reunion gigs shortly.  Nothing on YouTube that I can find.

Oh no! no music for us today Paul?

Would I let you down?  Of course not!  I mentioned REM at the top of the page - lets have some more REM!  And some monsters!